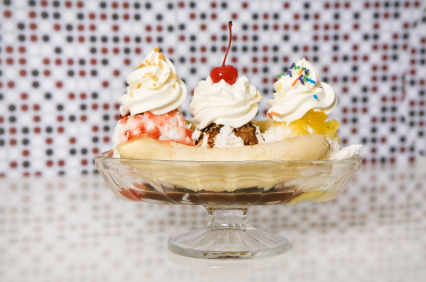 A dessert consisting of bananas, ice cream and an assortment of toppings. There are many variations on the banana split. The original variety of toppings is debatable, partially because the actual inventor of the dessert is in dispute, as is the location of where it was first served.

The town of Wilmington, Ohio, claims the fame, but so does Latrobe, Pennsylvania. Wilmington claims that in 1905, restaurateur Ernest Hazard created the dish during the slow winter months as a way to drum up business. He supposedly combined a split banana, ice cream, fruit, chocolate topping, whipped cream, crushed nuts and a maraschino cherry. Two hundred and seventy-five miles away in Latrobe, they claim that optometrist Dr. David Strickler invented the dish in 1904. He, too, purportedly created the banana split as a way to market ice cream in a new way at his soda fountain. The concoction combined a split banana; one scoop of each vanilla, chocolate and strawberry ice cream; chocolate syrup; strawberry sauce; pineapple topping; crushed nuts; whipped cream and also, a maraschino cherry. Many historians believe this last dish is the original – but don’t go proselytizing that in Ohio.