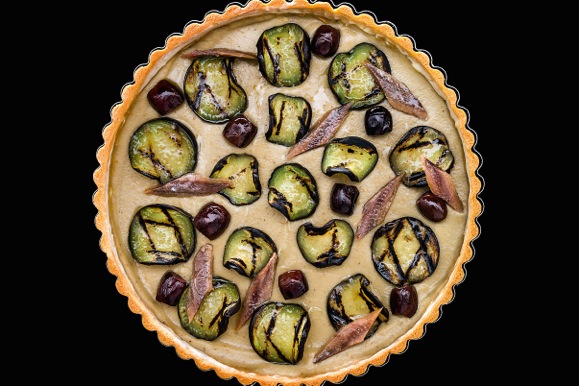 This Eggplant Purée Tart is from Tarts, by Frederic Anton and Christelle Brua. If you check out their Tomato and Anchovy Tart you will notice a similar aesthetic, which is what drew me to their book and body of work. The recipes are all about using high quality ingredients and letting them shine. The arrangement of ingredients has a minimalistic feel with a striking effect. The book includes sweet dessert tarts but I found their savory tarts to be most unusual and the ones I wanted to highlight. You will also find the likes of an Apple Tart and Blueberry Tart within the pages as well as more unusual offerings such as Chestnut Cream Pastilla, Pink Praline Tart and a very textural Banana Rum Tart that features dark rum, vanilla beans, baby bananas, cinnamon and star anise. There are tarts for all seasons, both sweet and savory.

Excerpted with permission from Tarts

by Frederic Anton and Christelle Brua. Published by Rizzoli, 2016. Photography by Richard Haughton.

and 15 minutes (for the filling)