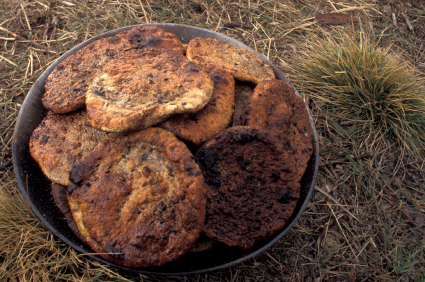 A type of flat bread. The term is used to describe breads from Ireland, Scotland and Northern England as well as the United States. In Europe, traditional bannocks were heavy and unleavened, made from barley or oatmeal and cooked on a stone or griddle that was placed directly on hot coals. Modern recipes add leaveners such as baking powder or baking soda. Native Americans also make similar bread by the same name, typically using wheat flour. It is comparably heavy, round and flat. Some sources claim that bannock did not appear in Native American culture until the Scots introduced it, while other sources say it pre-dated their arrival and that the bread is part of the indigenous cuisine.