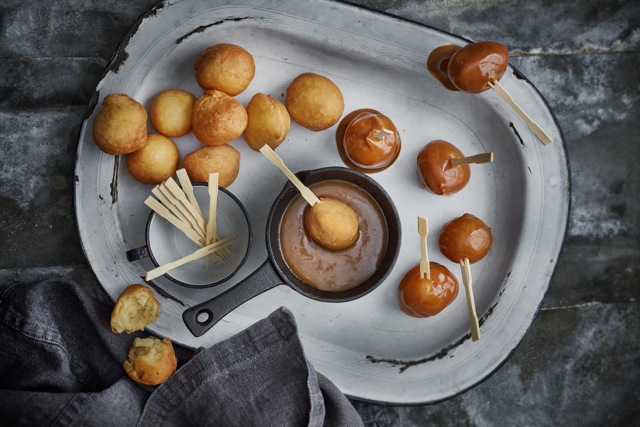 I am a doughnut fan, as long as they are eaten as fresh as can be. This is also why I am a huge supporter of homemade doughnuts. Get them while they are warm and they will rival many desserts. This version is based upon brioche dough and comes to us from Brendan Collins and his book, Cooking, Blokes & Artichokes. While the recipe began its life as a restaurant offering, the directions are clear and concise and imminently doable by you at home. I like that he suggests a 350°F temperature for the oil. When I was working on my doughnut book I too came to the conclusion that most doughnuts recipes call for too high a heat – typically 365°F to 375°F. As you know with baking and dessert making, little changes can make a big difference and in this case you get tender, golden brown little orbs to drench in a Bourbon Glaze. Check out his Lemon Tart as well.

In my first couple of years out of culinary school, I worked as a commis at Café Royal on Piccadilly Circus, just as a Dunkin’ Donuts was going in a few doors down. I had never had a doughnut before— they are very much an American import—but I quickly learned that doughnuts are something of a perfect food when you are young, broke, and working weird hours. I liked them so much that I set to work designing a version that would fit into a restaurant context. This recipe was on the menu at Waterloo & City for most of the time that restaurant was in business due to its tremendous appeal with our diners. It is seriously decadent. Brioche is buttery and rich to begin with, before you go dunking it in hot oil and finishing it with a buttery bourbon glaze.