My opinion is that I don’t get to review enough books by guys. I’m not talking about classically trained French pastry chefs. I’m talking about guys who love to cook and happen to bake and put a casual spin on baked goods and desserts that are approachable and down to earth. Brendan Collins might be a full-fledged chef (and has worked in some serious UK establishments) but he dishes up some fab desserts with this Lemon Tart and his take on doughnuts that are quite suitable for the home cook. This image grabbed me right away for its simplicity and its lack of perfectness. Look at the lemon curd filling oozing out just enough to show its silky smooth lusciousness. I love that he gives us a temperature cue because too many people over cook curds and they do not need to in order to obtain a thick-enough texture. A light and casual sprinkling of confectioners’ sugar completes the deal along with the classic and simple sweet crust. This recipe, and his brioche-based doughnuts, are from his book Cooking, Blokes & Artichokes. 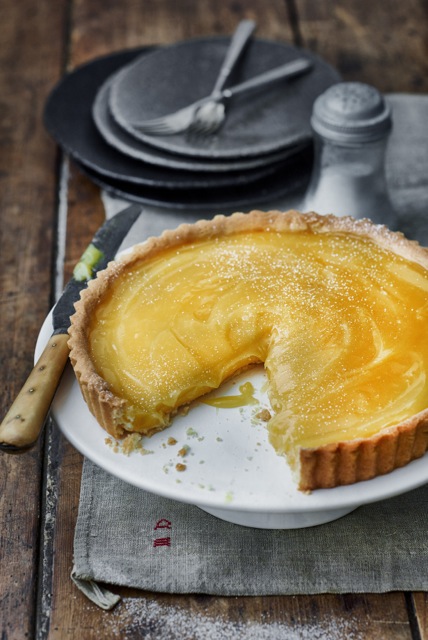 My grandma is not a great cook. She’s almost one hundred years old as I write this recipe, which means she was born bang in the middle of World War I and was just entering adulthood during World War II—no time to worry about kitchen skills with a war effort on! She was always a career woman, working into her seventies and only taking time off to have her three children. But she did know how to bake a little bit, and would make cakes and biscuits, my favourite jam, and lemon tarts.

Now before anyone gets excited that this recipe might be a family heirloom, it most certainly is not. Grandma’s was made using store-bought lemon curd and a pastry made from lard. It did, however, give me an early appreciation for the dessert, so when I moved to the big smoke (aka London) I genuinely thought I was a lemon curd expert. Then I ate a lemon tart at Marco Pierre White’s Criterion Brasserie, and it was one of those moments in life when you realize you don’t know shit and you have to start at square one.

This isn’t Marco’s recipe either; his takes incredible skill to cook correctly. But this is a very good lemon tart, in some respects equal to his, just a lot easier for the home cook to master.