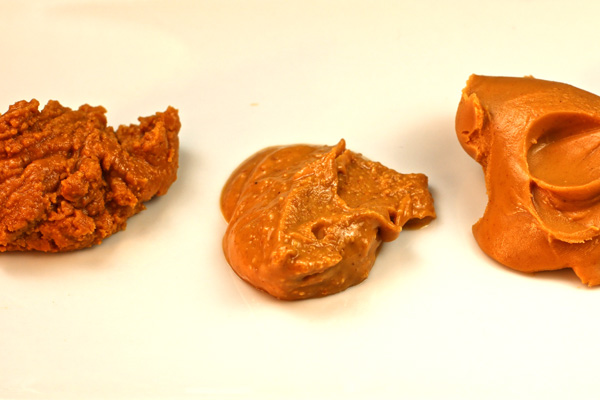 Look at the picture above. All types of peanut butter, yet very different peanut butters – even apparent without scratch and sniff! When you are making a peanut butter recipe, hopefully the recipe developer will specify what kind. What do we mean? Well, there was a time that peanut butters like Skippy, Peter Pan and Jiff were the only ones on the shelf, unless you were a fringe hippie (or your Mom or Dad were) and frequenting the weird little “health food” store. So when you made your cookies with one of those peanut butters, your dough acted as expected because the recipe was developed with that kind of peanut butter in mind, which has hydrogenated fats and sugar added. Decades have passed and the types of peanut butter available at the supermarket has broadened. If you use a different kind than what is recommended, your recipe might not work and that is a waste of time, money and energy.

On the left in the picture is fresh ground peanut butter. This is the kind you can grind yourself with the machine right in the store and pay for by the pound. It is typically dry and coarse, in comparison to others, and sometimes has salt, sometimes not and sometimes you won’t know! The one in the middle is commercially prepared natural peanut butter (we used Smucker’s); the only ingredients are peanuts and salt. Peanuts’ natural oils do rise to the top, but are easily stirred back in. The type on the right is Skippy Creamy, which is the “regular” Skippy and the one you might have grown up with. It’s ultra-smooth, but in addition to peanuts and salt, it contains sugar and hydrogenated vegetable oils (cottonseed, soybean and rapeseed).

It is not hard to imagine that the same recipe made with each type will bring very different results, so hopefully the type used when the recipe was developed will be specified – and you will use it.

Now we don’t want to confuse you further, but just to emphasize that it is vitally important that you read a recipe carefully and use what ingredients are called for, there are now eleven types of Skippy peanut butter on the market! Eleven! Many of the commercial brands have branched out and now also offer a reduced fat option, a reduced-sugar and sodium and probably the most controversial of all is what is called “natural creamy”. This is a hybrid where manufacturers promise a classic creamy texture but without the hydrogenated fat. The ingredients will be listed as peanuts, sugar, palm oil and salt and the label will often boast that it is “no stir”, meaning that the oil doesn’t separate – something that some consumers find annoying. The problem is that palm oil is very high in saturated fat.

As we always say, use the specific ingredient called for in any given recipe to ensure best results. Read the labels. If what you have is a recipe that just says “1 cup peanut butter,” you need to think critically. If it is an older recipe from a conventional cookbook, the classic Skippy Creamy style is probably what is needed. If the recipe is from a magazine, ditto. If you make peanut butter cookies with the “wrong” product, they will still be edible; it is mostly the texture that will suffer. So don’t worry too much, just get in the kitchen and bake and take notes for next time.