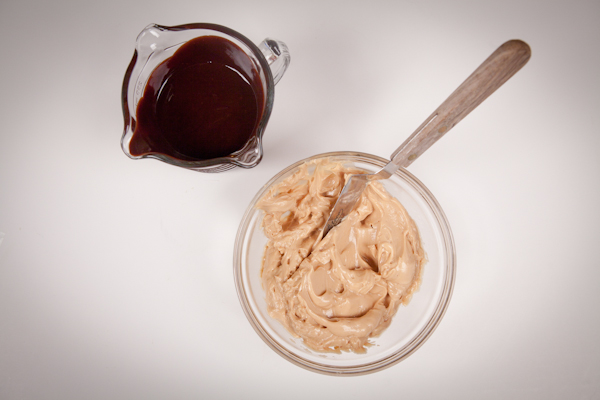 Leftover buttercream or ganache will keep in your refrigerator for up to two weeks, to be used for another dessert, and it will taste like fresh-made if you follow a few simple steps.

Chilled buttercream is very hard, so you need to let it come to room temperature and then aggressively whip it. Put the room-temperature buttercream in the bowl of a stand mixer fitted with the paddle attachment (or in a large bowl, and use a handheld mixer) and beat on low speed. As the buttercream starts to break up, increase the speed to medium. After about 1 minute, the buttercream will soften and separate. This may make you nervous, but just continue mixing, and within another minute or so, the buttercream will come back together and appear brand-new.

Ganache is not as malleable as buttercream, and leftovers require a more delicate handling. Let the ganache come to room temperature (do not try to rush the process—firm chilled ganache is likely to separate and become grainy when beaten). Then put it in the bowl of a stand mixer fitted with the whisk attachment (or in a large bowl, and use a handheld mixer) and whip on medium-low speed until the ganache forms soft peaks. Chill for 10 to 15 minutes, then spread it with an offset spatula.

The Four-Fold Technique: The Key to Great Homemade Dough
How to Make the Best Cookie Trays