How to Use a Pie Bird 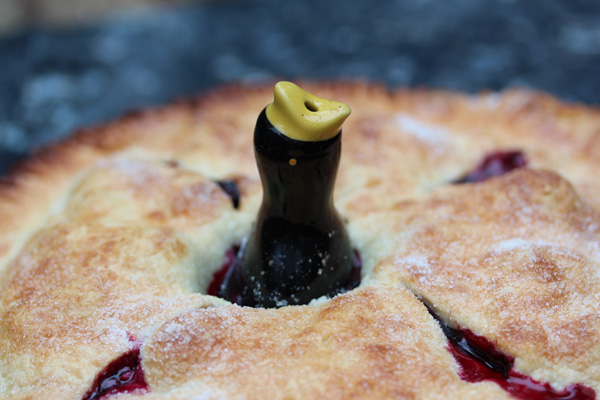 I guess the first question we should answer is “What the heck is a pie bird?” The picture probably isn’t fully explaining either…here is a bird’s eye view (pun intended): 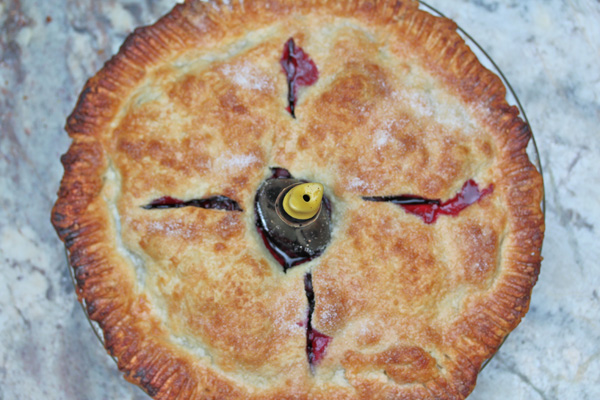 A pie bird is a tool, usually made of ceramic and shaped like a bird, that aids in venting steam from your double-crusted pie effectively preventing boil overs from juicy fillings and helping you attain a nice, crisp crust. They are also sometimes referred to as pie vents, pie chimneys, pie whistles and pie funnels. Whether bird-shaped or not, they are usually tall, narrow and always hollow (the steam flows up and out through the hollow center). Ceramic versions are classic, but they come in silicone now, too, as seen on the right in the photo below.

Now… the question of how to use a pie bird: Line the bottom of your pie plate with your bottom crust, place the pie bird in the center and scrape your filling into the crust and around the pie bird. Roll out your top crust on a lightly floured work surface, cut a small slit in the center, then carefully place the top crust on top of the filling. Use whatever technique is easiest for you: pick up the crust using fingers and palms, drape it over a rolling pin and use the pin to help transfer the crust, or roll it up with a rolling pin and unroll on top – your choice. Ease the pie bird up through the slit; it should fit snugly. (We think the ceramics are better, especially when you get to this step.) Crimp crust edges as desired and bake with the bird in place. Remove the bird after you have cut your first wedge of pie.

Do you need a pie bird? No. We have been baking pies without them forever, but we have to say that when we baked two pies side-by-side in the Test Kitchen, one with and one without, we did experience extra crispiness when the pie bird was used. And hey, they are inexpensive, make great host/hostess gifts and look darn cute hanging around on the shelf. They are all over eBay, vintage and otherwise, often for less than $10. You can read probably more than you ever thought you wanted to know about pie birds at PieBirdsUnlimited.