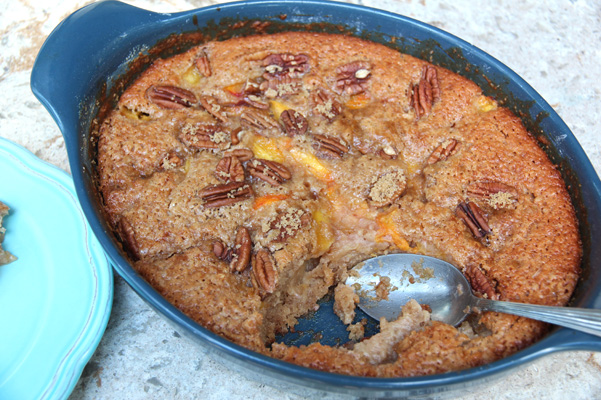 Who doesn’t like a good homemade dessert? No one I know. But the reasons I hear the most often for why folks don’t bake are that it is too hard or time consuming. Dump cakes promise to streamline the process. They are, like they sound, a dessert that involves dumping ingredients into a bowl or even right into the baking pan to mix. That’s it. They are supposed to be about convenience. But if you have been hanging around Bakepedia for a while you know that high quality ingredients and taste are usually how we decide to make a recipe and so many of the dump cake recipes we come across use boxed cake mix and canned pie fillings and the like. We went into the kitchen and took a stab at making a dump cake from scratch with great results – check out our Peaches and Cream Dump Cake.

But let’s look at where these came from. The history is murky and there is also some overlap with what are sometimes called Wacky Cake and also Crazy Cake. From what we can tell, the “dump” cakes of late are of the boxed cake mix/canned fruit variety, but way back in the early 1900s there were cakes that were made by mixing everything together, sometimes in a prescribed order. The techniques varied from mixing right in the baking pan, to mixing in a bowl and transferring to baking pan(s), to recipes where the directions are unclear. But they were all meant to be easy and basically a dump-and-mix approach. In the lean times of both world wars the recipes were often eggless and butter-less, due to ingredient shortages, and their “wacky” and “crazy” titles were comments on how amazing it was that they worked!

Whatever you call them, there is certainly something to be said about a dessert that can be made and baked in the same dish and prepared in the time it takes the oven to preheat. Go to the farmer’s market, get some fresh peaches and try our Peaches and Cream Dump Cake today. It would work with blueberries, raspberries or blackberries as well as other stone fruit.