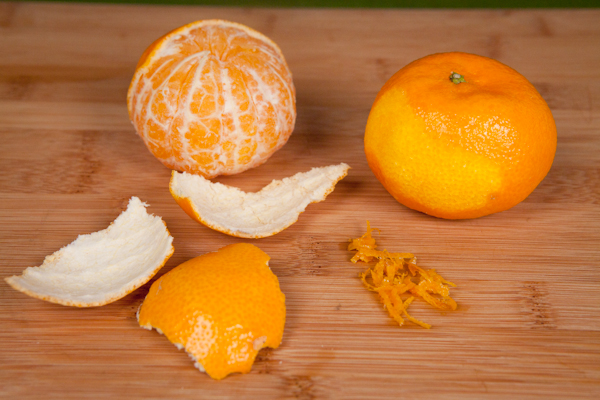 In the ingredient lists of some recipes, they will say to add lemon zest (or grated lemon zest) and sometimes it says grated lemon peel. Are these the same? Different? Well, it’s hard to know every author’s intention, but here’s the Bakepedia explanation:

Citrus zest is the outer, colored portion of the fruit – the vivid orange-colored part of a tangerine or an orange; the sunny yellow part of a lemon; the green of a lime, etc. On the right of the image you can see a tangerine that has been “zested”, that is, just the colored zest has been removed. Right beneath the zest  is the white pith. Sometimes the pith is very thick, as with some grapefruit where the pith might be a full ¼-inch thick or more, and it can have a cottony texture. Other times, the pith is very thin and seems to be just under the colored zest and in an equal thinness. Limes are often like this, as are tangerines as shown in the image above on the left. Herein lies the problem, because sometimes just removing the zest is difficult and you seem to get the white pith along for the ride. This would technically, then, be “citrus peel,” as when you peel a citrus fruit, you are removing both the zest and the pith. But in most recipes, what you want is the zest and only the zest. This is because the white pith can be bitter, and in the case of a thick pith, it can be a problematic and unwelcome texture as well. Recipe developers usually want you to have the flavor and pretty color of the zest (orange, yellow, green) and not white flecks of pith.

The issue is that many recipes say peel when they mean zest. They really want you to just add that colored portion, but they didn’t state it clearly. One notable exception is when you make candied citrus peel; you are often utilizing some of the pith and, in this case, it is expected.

The best way to grate citrus zest is to use a Microplane zester. This is a rasp-style grater with very sharp blades that easily remove just the colored zest and leave the pith behind. We find this tool to be as invaluable as a wooden spoon and think every kitchen should have one.

The Importance of Baking Proportions
How to Choose Citrus