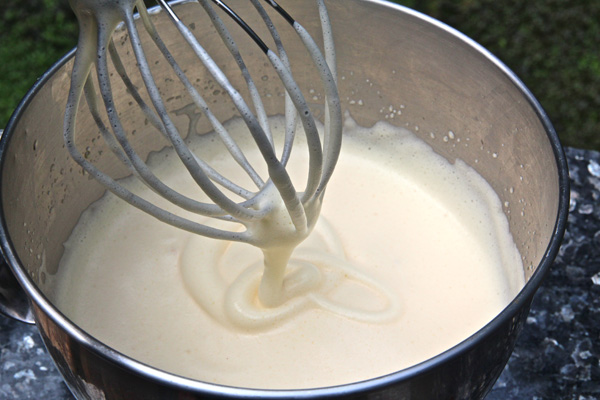 The baking world has its own language. We “cream and whip,” we “reduce until thick” and we beat “until a ribbon forms.” This last term is such an odd phrase and yet it is a commonly called-for technique in baking, so it’s important that you know what it means and why it is essential.

In the photo, you can clearly see the ribbon (in this case, it is just whole eggs that have been whipped) swirling down and momentarily being suspended on the bulk of the whipped eggs. The eggs have been beaten long enough to produce desirable thickness and loft, so that as you allow them to drizzle back down upon the bulk, they do not disappear immediately becoming one with the rest. If that happened, it would mean they were too loose and thin and hadn’t been beaten enough. Thus, when you see the phrase “beat until a ribbon forms” used in recipes (ours and others), this is what you want to look for. This technique is called for when the recipe needs structure, so stopping short of seeing that ribbon will not produce an optimum result. Keep beating!

In our example, the image is showing whole eggs, whipped with a wire whip until tripled in volume and until a ribbon forms. Sometimes you will see this phrase in reference to a mixture of whole eggs and sugar, or just egg yolks and sugar, so it is not dependent on the ingredients, rather it is what you do with the ingredients.

Our Flourless Chocolate Cake with Raspberries uses this technique to great effect. The recipe has just three main ingredients – chocolate, butter and eggs (the berries are optional). The eggs must be whipped until a ribbon forms, at which point they are combined with the melted and cooled butter/chocolate mixture. They give this cake structure and richness. The technique is also used when making a classic Génoise, which uses no chemical leavener and instead relies on the whipped eggs to provide loft and structure.

How to Use an Icing Spatula
Sifting Nuts