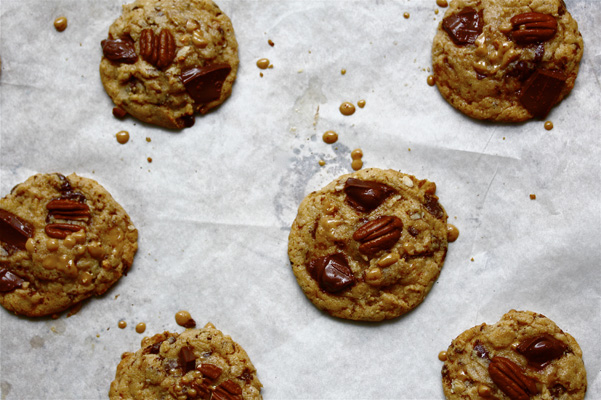 When I bake, 99% of the time I am working on a recipe for Bakepedia or another media outlet and since most of us do not use convection to bake, I rarely take that route. But many of us have a convection feature in our oven or are just curious as to what convection baking is so it made sense to do this Tip.

Very simply put, most ovens have radiant heat. The heat source, be it flame in a gas oven or an electric element in an electric oven, radiates heat out into the oven. For these ovens the heat simply surrounds the food. Electric ovens are known to be more even heating than gas, but both kinds can yield hot spots and uneven baking.

A true convection oven has an additional heat source and a fan that circulates the heat around the oven, creating a very even heating environment. This allows you to bake on more than one rack at a time without having to rotate pans front to back or up and down and all of your cookies or cakes will bake evenly. Convection heat is also very efficient and reducing the temperature of your oven is usually warranted. It is also more drying – which can be a good thing. You just have to know how to use it. It is fabulous for meringues for instance, where you want to dry out the baked good. Professional bakers often use it and like the results for laminated doughs where they need a high “puff” and rise. My bread baker at my bakery always used it for our baguettes as well.

To get a bit scientific, heat transference is sped up when exposed to moving air. This is not only why our baked goods bake faster but also why we get extra high and flaky results from the laminated doughs I mentioned (think croissants and puff pastry). The butter within the doughs is exposed to heat more quickly, and in turn steam is released faster, creating those flaky layers and pockets.

(Note that we are talking about “true convection”, which is defined as an additional heating element with fan, not just a fan mounted on the rear of the oven. The former is found in most high-end built-in or slide-in ovens and ranges. The later is found in many countertop models, which I am not addressing here). 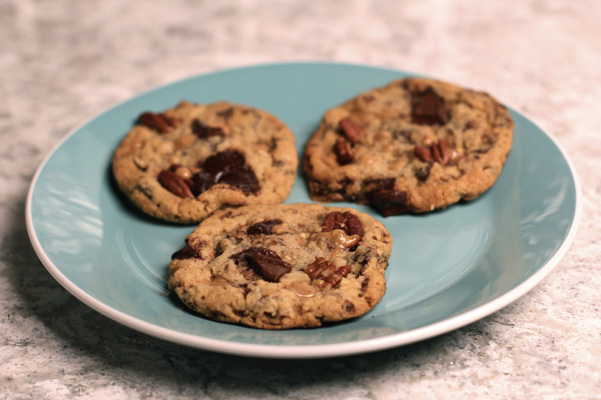 I decided to do a test with a classic recipe – chocolate chip style cookies (see our Toffee Peanut Butter Chocolate Chunk Cookies with Pecans). I made up a batch and baked half at 375°F with the regular oven function (shown immediately above), then I baked the other half at 350°F with the convection option (seen below and in very top image). Other than that everything was the same. I used the same brand and size/weight pan, lined with parchment paper and dolled out the dough with the same sized scoop. You can see from the images that there were a few differences. The cookies baked in the convection oven did indeed bake more evenly (see the very even color), but beyond that the more significant difference is that they also held their shape a little better and puffed up a little higher, creating a slightly thicker cookie. We like the look of the convection cookie a lot. What do you think? They also baked about 1 minute faster, perhaps a little less. This time saving tends to be more significant with items like cakes and larger, denser things. 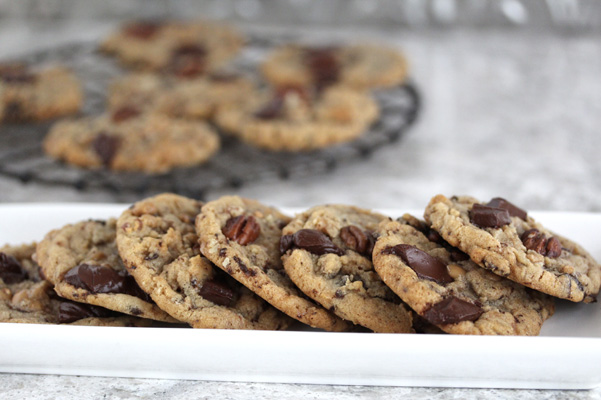 All in all, it is not scary! I say that because some folks have said to me that they haven’t used the convection feature because they were worried about what it would do to their baked goods. Folks, you won’t know until you try! Just follow these tips below, set the dial to Convection and see if you like it. Start with a recipe that you know well. That way you can more easily observe the results. And then let us know your experiences. Are their certain items that you always bake with convection or any that you would never bake with convection?

If you want to see an animation of how a convection oven works, check out this video from finecooking.com. Ready to bake with convection? Try our Toffee Peanut Butter Chocolate Chunk Cookies with Pecans.