All Your Favorite Thanksgiving Dinner Flavors in a Pie 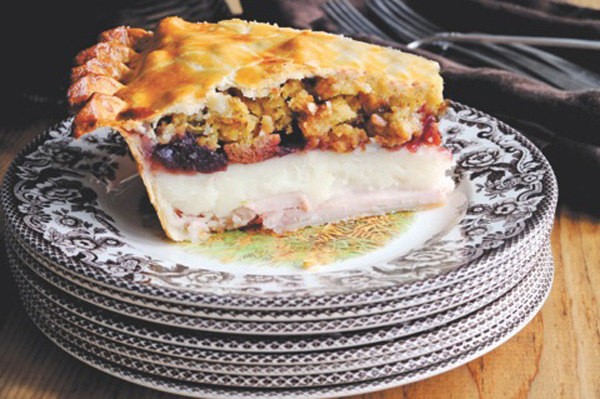 I am a huge fan of day-after Thanksgiving sandwiches, combining all of the holiday dishes, but look at this slightly more formal variation – Thanksgiving Pie – from Sherry Gore’s book, Me, Myself, and Pie. We might be trying this version as well as one substituting mashed sweet potatoes for the traditional white potatoes. Either way you can’t go wrong. The book is packed with all things pie, sweet and savory such as this recipe as well as the Skillet Pear Ginger Pie, which would be a perfect last-minute addition to your dessert line up.

Excerpted with permission from Me, Myself, and Pie

The Pilgrims could only dream of these sorts of fixin’s during the first Thanksgiving, and it’s a good thing too: they might’ve spent all their time with this inventive pie, made up of Thanksgiving leftovers, and forgotten about that “discovering a new land” idea altogether.