Campfire Flavor from the Broiler 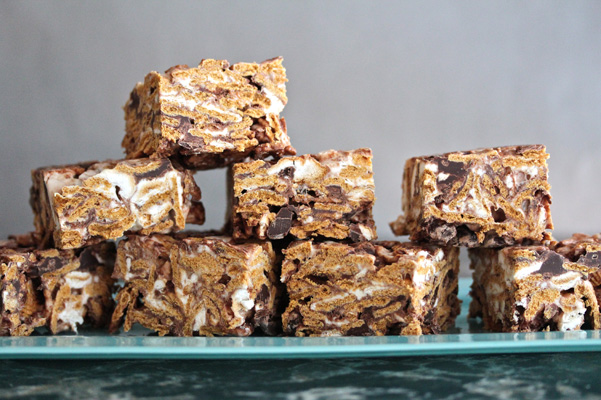 The assemblage of flavors that creates S’Mores is well known – a combo of graham crackers, chocolate and marshmallows. I wanted to make S’mores Marshmallow Treats so I knew I would start with Golden Graham cereal, which has that whole-wheat graham flavor. The chocolate would come in the form of tiny nuggets – chocolate chips! The marshmallow was the factor that made me pause. With a S’more, the whole attraction to that treat is the toasted marshmallow. Marshmallows are sweet and squishy with a tiny bit of chew. When you toast them the exterior takes on a crave-worthy burnt sugar taste and the inside melts and becomes creamy. How was I going to do this easily and in the kitchen? I came up with an idea that was either going to work really well or fail spectacularly. I scattered the butter, cut into small pieces, all over a clean rimmed baking sheet pan and then scattered the mini marshmallows on top. Under the broiler it went and I waited for the marshmallows to melt and toast. They also kind of puff up a little. As soon as they were toasty, but not burnt, I upended the pan over the bowl of waiting cereal and chocolate and…it worked! The marshmallow didn’t stick to the pan. In fact, the butter melted and the marshmallows toasted on top of this layer of slipperiness. When I attempted to pour the mass over the cereal I feared that the marshmallows would stick to the pan. Instead, floating on top of the melted butter, they flowed quite readily into my waiting bowl along with the butter. Perfect. Make sure to also check out our Cappuccino Crispy Treats, which offer an adult kick of espresso, and our Kix Marshmallow Treat Balls.

Print
S’mores Marshmallow Treats
Author: Dédé Wilson
Makes: 12 to 25, depending on how you cut them
Ingredients
Instructions
3.2.2925