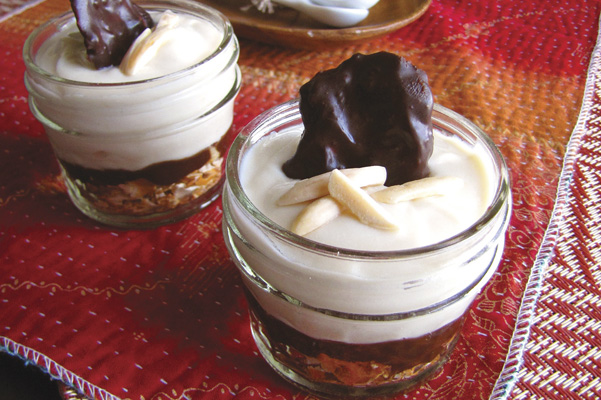 When the “desserts in jars” phenomenon took off it was only a matter of time that niches would evolve – such as Kris Holechek Peters’ Vegan Desserts in Jars. Whenever we have brought you a dessert in a jar, you all seem to love them, so it was high time we posted something for the vegans among us. Leafing thought her book I came across this Salty Crunchy Almond Cheesecake and it was the first one I had to make. The title just grabbed me. I am a sucker for the sweet/salty thing and if chocolate is involved it is a slam-dunk. Combine that with a no-bake approach and pretzels…okay, I wont keep you any longer from heading to the kitchen. Also check out the Over The Rainbow Cakes and the Peach Melba Cobbler.

Salty/sweet is a popular flavor combination these days, and who can blame anyone for seeking it out? This no-bake treat is the perfect combination of crunchy, salty pretzels, a thin layer of chocolate, and creamy, almond-scented cheesecake.