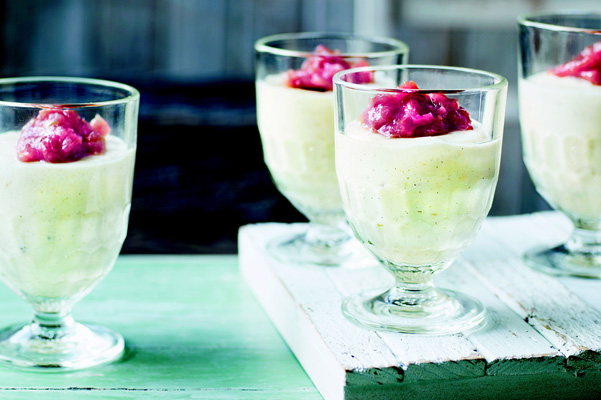 This recipe, as well as the Chester Cake and Elderflower Gelatins are from a new book of Irish cooking by Clodagh McKenna. I chose this one for the use of the natural thickener, carrageen moss. It is a seaweed found in many traditional recipes from the UK but this is the first we have featured. I am always interested in playing and experimenting with new ingredients, even when they are classic and just new to me. I found mine through a local whole foods store but you can also check Amazon if you cannot find it locally. It is mild in flavor and is hard to describe but it provides a lovely soft-gelled texture if used in the amounts as suggested. The floral rose water accents the tart rhubarb quite well and the whole vanilla bean really brings all the flavors together, so don’t skimp on that ingredient. 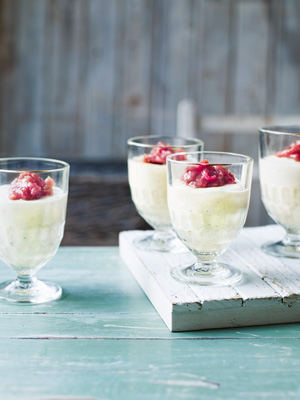 Excerpted with permission from Clodagh’s Irish Kitchen: A Fresh Take on Traditional Flavors

Carrageen moss is a red seaweed found on the West and South coasts of Ireland. The seaweed has been used in recipes for years in Ireland as a natural thickening agent. It has a very subtle sea flavor, and you can find it in health stores, where it is sold in dried form. This pudding is light and fluffy, sweetened by the delicate rose water and lifted by the tangy rhubarb compote. It’s perfect to serve as a dessert after fish as it cleanses the palate. If you are unable to get your hands on rose water, you can just leave it out.