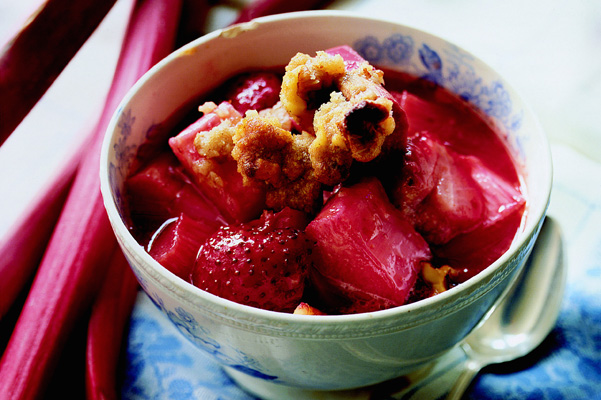 was not easy. The subtitle, A Treasury of Heirloom and Contemporary Recipes truly says it perfectly. This Throwback Thursday book is one that I refer to again and again – and believe me, with the 2000 cookbooks I own that is saying something. The book was first published in 1994 and immediately became a favorite of many of my fellow cookbook authors specializing in sweets. Sax brought a modern day appreciation to old-fashioned classics like cobblers and fools, icebox cakes and bread puddings and simple poached fruit desserts. Sax was a prolific recipe developer. He founded Food & Wine’s Test Kitchen, contributed regularly to Bon Appetit magazine and wrote half-a-dozen cookbooks. He was known within the industry as someone you could turn to for solid recipes that worked and his sense of flavor and texture was always spot on. This recipe combines two spring offerings – rhubarb and strawberries – and presents them under a crisp, brown sugar laden walnut crisp. Easy and delicious. This book should be in your collection. And make sure to try the Reuben’s Legendary Apple pancake, a green apple and raisin extravaganza laden with caramelized sugar, the Lattice Topped Peach-Berry Pie and his version of Tiramisu. 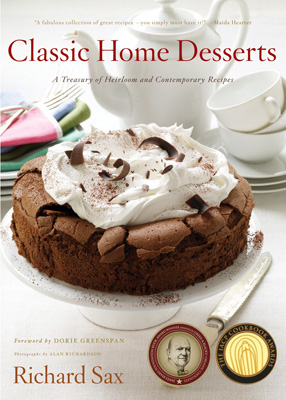 For the first 200 years in America, rhubarb pies were almost as popular as apple or mince. In fact, so strong was the connection that for years people called rhubarb “pie plant.” Technically a vegetable, rhubarb makes as good a crisp as it does a pie. Not only does the old rhubarb-and-strawberries combination play sour against sweet, but the two arrive in the garden at the same time in spring.