The Polish Princess – Baking from The Baking Bible 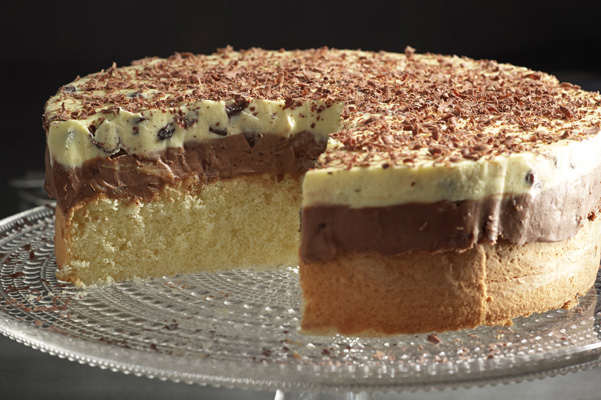 When I received my review copy of The Baking Bible and perused the recipes, choosing one to make first, my mind settled on creating The Polish Princess. Rose’s response was, “Of course you did!” This was a somewhat serious, somewhat humorous response to my penchant for making her most involved cakes, which she likes to tease me about, but I chose it for other reasons as well. First of all, it is unique: the flavors of black tea and vodka, dark chocolate and walnuts, a layer of sponge cake, a dreamy pastry cream based buttercream in two contrasting layers and a shower of tiny chocolate curls was an enticing proposition. Her image is above. But I also liked that it would highlight so many things that make a cake a Rose creation. Making a cake like this is rewarding and teaches many lessons. As with so many of Rose’s recipes there is length and detail, but every word is chosen carefully. Be open to the process. You can also read my full review of her book, The Baking Bible. Here, is my overview of creating this luscious cake. The images that follow are of my version: 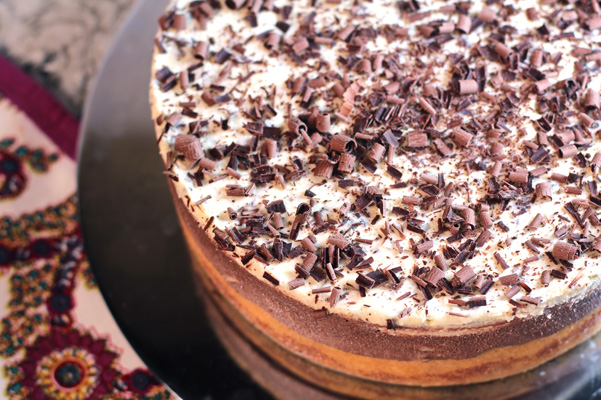 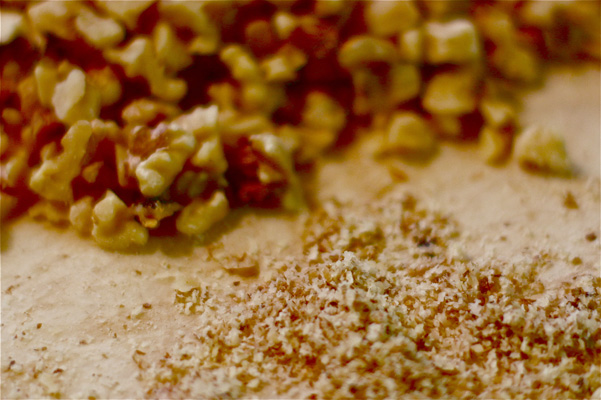 Excerpted from The Baking Bible

This extraordinary cake is named for Ava Wilder-Zhan, the incomparable production editor of Rose’s Heavenly Cakes. Its original name in Polish was The Ambassador, and it is a contemporary, not a traditional cake. The cake came into popularity in the early 1990s, after the fall of communism when there was an influx of quality chocolate, alkalized cocoa, and raisins from abroad. When Ava described it to me and offered to help me re-create it, I was sufficiently intrigued to give it a try. As she described it, the cake has one simple baked layer, a sponge cake. It is then topped with two layers of vanilla pudding, one enhanced with cocoa and walnuts, and the other studded with chopped chocolate and raisins. After finally perfecting the cake, I made it as a wedding present for Ava and her husband, Luke.

Plan Ahead The cake component can be made 1 day before assembling with the pastry buttercreams. Assemble the cake at least 8 hours before serving.

Special Equipment One 9 by 3 inch springform pan, encircled with a cake strip, coated with baking spray with flour, then topped with a parchment round.

Preheat the Oven Twenty minutes or longer before baking, set an oven rack in the lower third of the oven and preheat the oven to 350°F/175°C.

Mix the Dry Ingredients In a small bowl, whisk together the flour and baking powder.

Make the Batter Continuing on medium-high speed, add the egg yolks, 1 at a time, beating for about 20 seconds between each addition. Scrape down the sides of the bowl as needed. Sift the flour mixture over the egg mixture, and with a slotted skimmer or silicone spatula, fold gently until all traces of flour have disappeared. With a silicone spatula, reach to the bottom of the bowl to be sure to moisten all of the flour. Gently fold in the water until incorporated. This will deflate the batter slightly. Scrape the batter into the prepared pan. Use a small offset spatula to smooth the surface evenly. The pan will be only about one-third full.

Bake the Cake Bake for 20 to 30 minutes, or until the cake springs back when pressed lightly in the center and a wooden skewer inserted into the center comes out clean. (An instant-read thermometer inserted into the center should read 193°F/90°C.) The cake should not start to come away from the sides of the pan. The cake’s sides will have risen to a little more than halfway up the sides of the pan.

Make the Tea Vodka Syrup In a small saucepan with a tight-fitting lid over medium-high heat, bring the water to a rolling boil. Remove the pan from the heat. Add the tea bag, cover, and let it steep for 2 minutes. Discard the tea bag. Pour the tea into a glass measure and stir in the sugar, lemon juice, and vodka until the sugar is dissolved. Cover it tightly and let it cool just until warm or room temperature.

Notes A 9 by 2¾ inch springform pan can be used for baking the cake. However, for composing the cake, a collar made from heavy-duty aluminum foil will need to be attached with shortening to the inside of the springform pan’s sides to give a total height of 3 inches to accommodate the top layer of pastry buttercream.

It is best to set the cake on the base of the springform pan before syruping, and then reattach the sides as described in the recipe, because the cake is more fragile after syruping and would break when lowering it into the pan.

If you prefer to compose the cake directly on a serving plate, carefully reinvert the cake onto the serving plate. Slide the springform pan’s sides around the cake and lock them in position.

Prepare the Egg Mixture Have ready a fine-mesh strainer suspended over the bowl of a stand mixer. In a medium bowl, whisk together ½ cup/118 ml/4.3 ounces/121 grams of the milk and the cornstarch until smooth. Whisk in the egg yolks until completely blended.

Mix the Vanilla Bean with the Sugar With a small sharp knife, split the vanilla bean pod lengthwise in half. In a medium heavy saucepan, add the sugar. Scrape the vanilla bean seeds into the sugar and rub them in with your fingers. Add the vanilla pod.

Complete the Pastry Cream Add the remaining milk to the sugar and vanilla mixture, and scald it over medium heat, stirring often (heat it to the boiling point; small bubbles will form around the periphery). Whisk vigorously while adding ¼ cup of the hot milk mixture to the egg mixture. Quickly add all of the egg mixture into the remaining hot milk mixture, whisking rapidly. Continue whisking rapidly over medium heat for about 30 seconds, or until the mixture is very thick and beginning to bubble.

Remove the mixture from the heat and strain it into the bowl. Use the back of a spoon or a silicone spatula to scrape any thickened cream from the bottom of the pan and press it through the strainer. Whisk it slightly. Coat a piece of plastic wrap with nonstick cooking spray and set it directly on the surface of the pastry cream to prevent a skin from forming. Set the cream aside to cool for 1 hour.

Refrigerate the pastry cream until cooled to 65° to 70°F/19° to 21°C, very gently folding it every 15 minutes. Between foldings, place plastic wrap coated with nonstick cooking spray directly on the surface of the pastry cream to prevent a skin from forming. This will take about 2 hours. For faster cooling (under 1 hour), you can set the bowl in an ice water bath (see page 538) immediately after straining the pastry cream, folding every several minutes.

Add the Pastry Cream to the Butter In the bowl of a stand mixer fitted with the whisk beater, beat the butter on medium speed until light and creamy.

Add the cooled pastry cream to the butter, a large spoonful at a time, beating a medium-high speed for several seconds after each addition until smoothly incorporated. Scrape down the sides of the bowl as necessary.

Preheat the Oven Twenty minutes or longer before baking, set an oven rack in the middle of the oven and preheat the oven to 350°F/175°C.

Toast the Walnuts Spread the walnuts evenly on a baking sheet and bake for about 7 minutes to enhance their flavor. Stir once or twice to ensure even toasting and avoid overbrowning. Turn them out onto a clean dish towel. With a small sharp knife and your fingers, scrape off and discard as much skin as possible. Cool completely. Cut each walnut into thin slices.

Complete the Cocoa and Walnut Pastry Buttercream Set the mixer bowl containing the pastry buttercream in the stand mixer fitted with the whisk beater. Add the cocoa and beat on low speed until smoothly incorporated. With a silicone spatula, fold in the walnuts.

Complete the Chocolate and Raisin Buttercream With a silicone spatula, fold the coarsely chopped chocolate and the raisins into the pastry buttercream base. Cover the bowl with plastic wrap.

Compose the Cake Scrape the cocoa and walnut buttercream onto the cake in the springform pan and, with a small offset spatula, spread it evenly, taking care not to get any of the buttercream on the sides of the pan above the layer of the buttercream. Cover the top of the pan with plastic wrap and refrigerate for about 1 hour, or until firm. Then spread the chocolate and raisin buttercream layer evenly on top.

Set the pan on a sheet of parchment to catch any falling grated chocolate. Using a coarse shredder, grate the chocolate on top of the cake to cover the buttercream completely. Lift the pan from the parchment and use the parchment to transfer any of the fallen grated chocolate onto the cake. Cover the cake with a large bowl or cake carrier dome. To meld the flavors of the components, chill the composed cake overnight in the refrigerator.

Let the cake sit for about 20 minutes to soften before serving. To cut cleanly through the cake, run the knife blade under hot water and wipe it off between each slice.

Store Airtight: refrigerated, 3 days. Do not freeze, because the texture of the buttercreams will become less smooth.

3 Responses to The Polish Princess – Baking from The Baking Bible