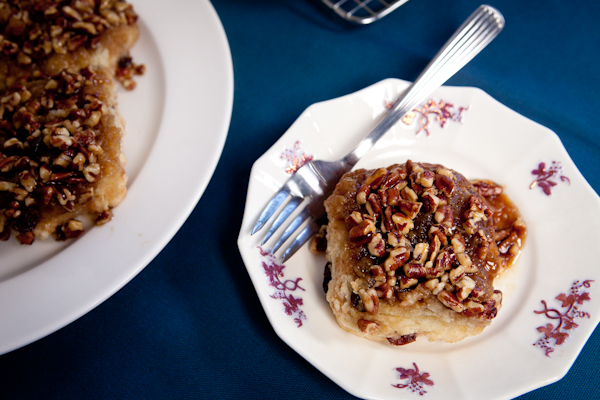 When you walk through a mall and smell cinnamon buns, does it make your knees go weak? We’ve been there. There is something about the aroma and flavors of cinnamon, brown sugar and lots of butter that makes the whole more than a sum of its parts. Put that together with a sticky, chewy, nutty topping and you get an unforgettable experience. This recipe features all of those delectable qualities along with a quick-to-make raisin buttermilk biscuit that has a rich, buttery ripple of cinnamon sugar. That’s right; no yeast, no waiting around for the dough to rise. This is one of my favorite brunch dishes to make and they are best eaten as close to baking time as possible, when the warmth and gooeyness are at their peak. The recipe was inspired by a similar one in Sticky, Chewy, Messy, Gooey: Desserts for the Serious Sweet Tooth

(Chronicle 2007) by Jill O’Conner. If you like sweet, be sure to check out the book for her inventive take on desserts.