One of Our Pumpkin Recipe Finalists

We liked these Paleo Pumpkin Streusel Muffins from Dominique for a few reasons: they are paleo and GF, and that has been of interest to our community, we were intrigued with the use of almond and coconut flour and the combo of pumpkin and banana. We have enjoyed working with coconut flour but find that it is often best when complemented with another flour and Dominique worked out the proportions beautifully. And then the streusel makes them a little fancy, which is nice for a paleo/GF item. Dominique blogs at perchancetocook.com.

Let’s get to know Dominique:

Dédé: How did you find Bakepedia?

Dominique: It was through one of your Roundups that I participated in…the one from July.

How did you decide what to make?

I had a babysitter growing up who made a pumpkin bread that I loved and I wanted to create a paleo version. My brother had made hers recently and said he wanted one with less sugar and butter…so I got to work and tried 3 or 4 times and came up with these…

How much did you veer off from the original?

I wrote it down and next to it I wrote down one of my paleo muffin recipes that I really like…then looked up 2 other paleo muffins with good ratings and compared what was similar and what was different. Then I started testing and at first it was too spongy…kind of cheesecakey; kind of odd. So I shifted my approach and added another egg and introduced the almond flour. Then I wanted more pumpkin flavor and increased the spices to make the pumpkin stand out more. Then in the end I added the streusel!

Any tips for those who want to make your muffins? Can they be frozen?

I haven’t frozen them but they last a really long time – a week even. Seven full days.

Just out on the counter in open air.

Thank you Dominique and Good Luck! 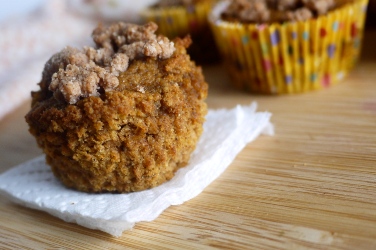 These taste just like my childhood favorite pumpkin loaf, except without the flour, sugar, or butter.