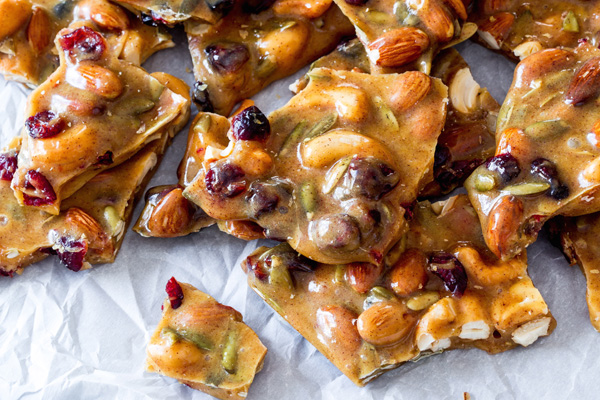 Candy making can be daunting and if you are new to it, a brittle is a great place to start. While author Sally McKenney does ask for the use of a candy thermometer here, don’t let that scare you away. After all, if you are using a tool whose very raison d’etre is to take the guesswork out of the recipe, then it is like having a finely calibrated helper in the kitchen! This is her take on the classic peanut brittle but here she combines almonds, pepitas and cashews with dried cranberries and cinnamon. The salty and sweet combination does indeed lead one down the path of incessant nibbling. Don’t say we didn’t warn you! This recipe, along with her bright red Candy Apples, is from her book Sally’s Candy Addiction. 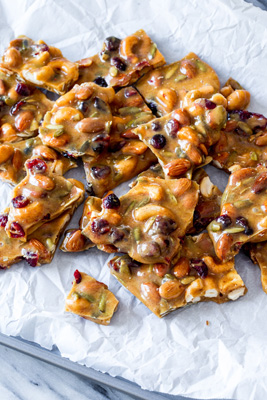 I have to be honest with you . . . this brittle exceeded my expectations and then some! I wanted to create a fun twist on Peanut Brittle for this book, and a slew of nuts came to mind. To make it even jazzier, I threw in some dried cranberries and cinnamon. Each crunchy, buttery bite reminds me of cool fall days. I normally have a ton of self-control around desserts, but I could NOT stop grabbing piece after piece of this overloaded brittle. Just could NOT. All caps. I urge you to measure and set out the butter, baking soda, vanilla, cinnamon, nuts, cranberries, and seeds before you start making the recipe.