The Biggest, Most Impressive Apple Pie 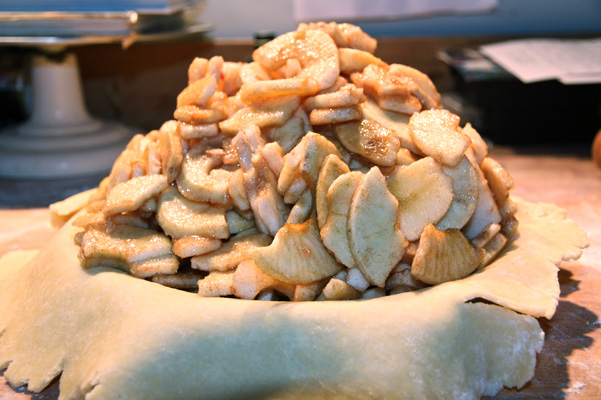 Pies can be a homey affair and the way my Nana used to throw them together seemed like second nature and they were always good. But every now and then I see a pie in a bakery window or in a magazine spread and it is drop dead gorgeous – I would even say stunning – and the pies that usually get my attention are the huge ones. The big and tall ones. Sometimes they have billows of meringue or whipped cream on top but most often they are the double-crusted apple pies that are deemed Mile-High Apple Pie. I love a good buttery crust, but I really love a high ratio of juicy, fruit filling, so these speak to me. There are tricks beyond just using more fruit and that’s what this recipe is about. Read the Tips first to learn about the right equipment, ingredients and techniques used to make a Mile-High Apple Pie of your own.