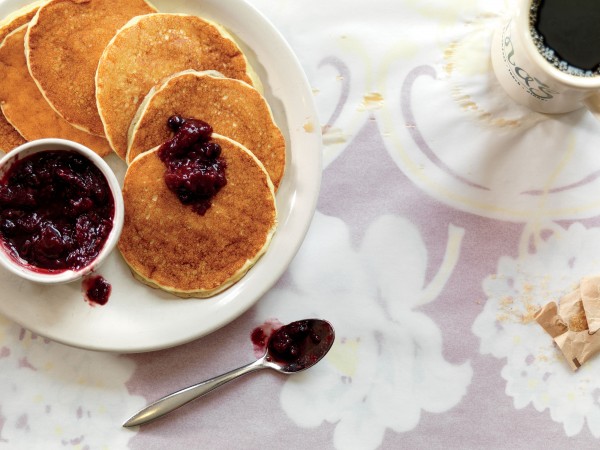 If you live in Chicago and have a penchant for breakfast then you know Ina Pinkney. She is known as the “Breakfast Queen” and fed Chicagoans and visitors for over 30 years, but she closed the doors to her place in 2013. Now we have her recipes – and stories; the gal’s got stories – about her rise to foodie fame along with recipes for her largely comfort food style treats in her new book, Ina’s Kitchen. These Heavenly Hots are light as air pancakes. Ina suffered from a childhood illness that threatened to severely limit her mobility. Turns out these pancakes, famed ballerina Maria Tallchief and Ina have a connection, as you will read below. Ina has also brought us her Best Ever Biscuits.

Reprinted with permission from Ina’s Kitchen

The following accompanies the Heavenly Hots recipe in Ina’s Kitchen. In Ina’s own words:

In one of my newsletters I wrote about people I wanted to feed. High on that list was Maria Tallchief—an Oklahoma born Native American prima ballerina.

One of my favorite customers called to say she was bringing Maria to lunch and when I sat across from this icon, I told her why I wanted to meet her.

By the time I was 3, I was already angry about all the pain and exercising that came with polio.

After that, when my father did my daily exercises with me and I protested, he would quietly say, “Maria Tallchief wouldn’t say ‘no,’” and I kept on. Whatever mobility I regained was a direct result of her name being spoken. I told her that story. And we both cried. And then we ate.

I made her my Heavenly Hots Pancakes, which are as light and elegant as her every move.