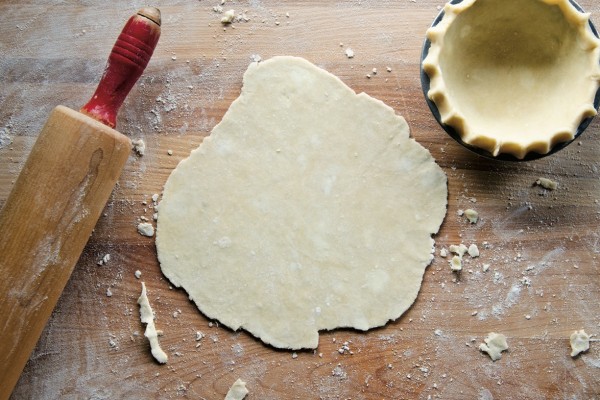 Ken Haedrich runs The Pie Academy, so who better than he to bring us his Go-To Pie Crust that he uses throughout his book, Dinner Pies.

This recipe is used in his Shepherd’s Pie and his Turkey Crumb Pot Pie.

and used by permission of The Harvard Common Press.

It’s no mystery why I call this my “go-to” dough: It’s so versatile that I use it for perhaps four out of every five of the savory (and sweet) pies that I make. You can’t beat it for reliability, and it bakes up to a beautiful texture, perfectly balanced between flaky and short. This is the single crust recipe; the double crust version follows. The recipe calls for a food processor; to make the dough by hand, see the Note.

To make the dough by hand, chill all of your ingredients as specified in step 1, but increase the flour to 1 1/2 cups plus 1 1/2 tablespoons. Remove the butter and shortening from the refrigerator 5 to 8 minutes before mixing; it should have a little “give” to it when squeezed between your fingers. Add about 6 tablespoons of the butter to your dry mixture; toss to coat with flour. Using your pastry blender, cut in the butter until the largest pieces of fat are pea-size. Add the remaining fat, toss to coat, and cut that in. The entire mixture should look like it has been “touched” by the fat, and nothing should be larger than pea-size. Pour half of your liquid down around the sides of the bowl, but not in any one spot. Mix well with a large fork, moving the mixture in from the sides and up from the bottom. Repeat with the remaining liquid, but add the last few teaspoons only if needed. Rub and smear the crumbs as specified in step 4 until a dough starts to form. Pack the dough and knead gently a couple of times. Flatten into a disk, then wrap and refrigerate