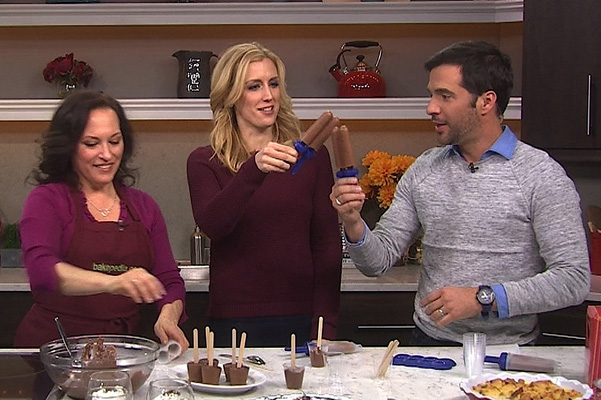 What’s going on in this picture? Well, this was taken from our Pudding segment on Better.tv where we made a classic chocolate pudding as well as a chocolate pudding pie. Anyone who has spent time on the set of a TV show knows that things never unfold the way you expect and you have to be ready for anything. It’s one of the things I like the most…keeps me on my toes! My daughter Ravenna and I were prepping food for the segment the day before taping when the producer called us and asked us if we could fill in an extra 3 minutes. We said yes, hung up, and then looked at one another and said – how the heck are we going to do that? We had limited time to get our act together so we started brainstorming…we already were making chocolate pudding and had all those ingredients around. Was there something we could make that could spin off of that? I don’t know if the fact that Bill Cosby has been in the press so much recently made us think of pudding pops but once we thought of them we got really excited. What would happen if we poured our homemade chocolate pudding recipe into pudding molds and froze it?

We whipped up a batch and waited…Ravenna happened to have liquid nitrogen around (don’t you?) and wanted to hasten the result but I wanted to see how this would unfold like it might for you at home. So we waited…and then…

As you can see in the image above with me on the Better Show kitchen set with Kristina and JD the pops worked! These ended up being the richest, creamiest chocolate pops imaginable. We made some in a popsicle mold (those are the ones the hosts are dueling with) and others we simply molded in clear plastic shot glasses and used wooden popsicle sticks. (By the way, it is not easy to find popsicle molds in January even in NYC. Finally, way out in Queens, Bed, Bath & Beyond came to the rescue and we found these twin pop molds). The pudding is so rich that as soon as you pour it into the cups you can press the wooden sticks in right away; the pudding is thick enough to hold them upright and straight.

The yield (how many pops you get) out of the Easy Chocolate Pudding recipe will depend on the size of your mold or cups. You don’t have to prep the molds or cups. Just pour the prepared pudding into the molds, allow to cool to slightly swarm, then freeze overnight. To unfold, simply run warm water on the outside of your pops and pull by the handle. Voila! Homemade Frozen Chocolate Pudding Pops.