When I was testing the Watermelon “Cake” a mistake in the kitchen led to two open cans of coconut milk that we had no immediate use for. Being mid-summer I wanted to make something without turning on the oven so I turned to one of my favorite books of 2013, Bakeless Sweets. Author Faith Durand is brilliant and there are enough puddings, mousses, gelatins and panna cottas and other smooth, creamy, slippery treats in this book to keep me happy for years to come. She saved the day with her Double Coconut Pudding with Coconut Brittle. It is rich, cool and creamy and the crunch topping adds a textural contrast that is most welcomed. I didn’t agree with her Butterfinger analogy (see below) but the topping was delicious nevertheless; yes we kept snacking on it! I like to keep the brittle a little coarser than she suggests as you can see in the image. 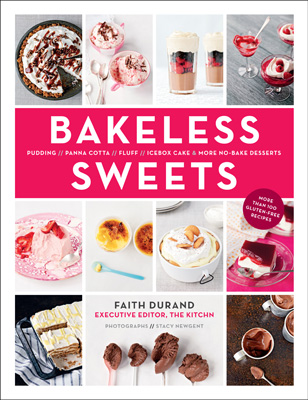 This pudding is milky and fresh, tasting of real coconut, and topped with a fabulous crisp coconut brittle that tastes like the inside of a Butterfinger candy bar. For this pudding, look for coconut milk that has not been blended or homogenized with added stabilizers. I prefer the Thai brand Chaokoh, which can be found in almost any Asian supermarket.

(The brittle) tastes far better than it has a right to – after all, it’s little more than cooked sugar mixed with toasted unsweetened coconut. I increase the ratio of coconut to sugar, so it tastes more of coconut than brittle, and then chop it into fine crumbles.