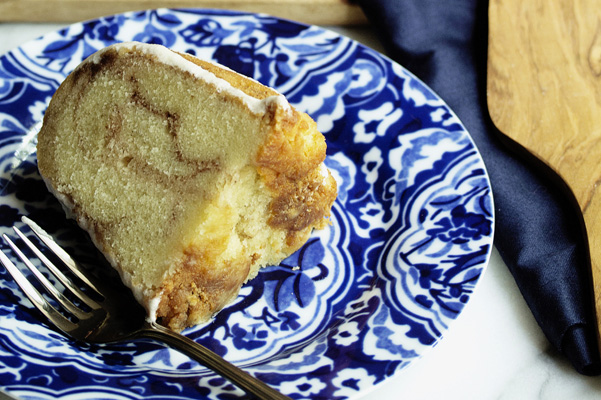 When I first read the headnote below, I thought it said, “Before that movement”, as in the-movement-of-adoring-cinnamon-rolls. Made sense to me. Those who crave and worship the cinnamon roll form a strong lobby. The smell of cinnamon wafting from the oven co-mingled with butter and dairy aromas is hard to resist, yet the production of making a true cinnamon roll eludes many or is just not that attractive a task for others. Jocelyn Delk Adams has brought us the flavors of this classic breakfast treat and turned it into an easy and even more versatile pound cake. This recipe, as well as her adorable, individual Caramel Apple Pound Cakelettes, is from her book Grandbaby Cakes. Her blog of the same name has been wildly popular and now she has a book filled with homey, vintage recipes and ideas touched by her fresh, modern spin. (If you haven’t already, come check out my CRAFTSY class on Coffee Shop Cakes: Good to the Last Crumb with this discounted link. If this cake rings your bells, so will the class!) 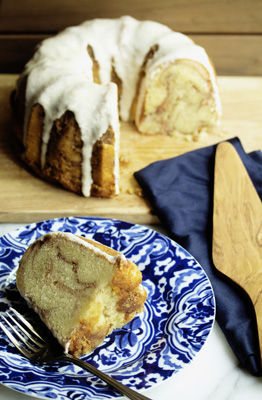 Reprinted with permission from Grandbaby Cakes

When I was 28 years old, I made my first batch of homemade cinnamon rolls. Better late than never! Before that moment, I loved watching Big Mama make all her yeasty, high-rising rolls without attempting to make them myself. Instead, I ate store-bought honey buns whenever I craved them.

This cake is a tribute to good ol’-fashioned gooey rolls, soft and full like fluffy pillows, piping hot out of the oven, entwined with ribbons of spiced cinnamon sugar, sticky with dripping cream cheese icing—the kind that make you want to slap yo’ mama. Don’t worry, I don’t mean that phrase literally! No one should ever slap his or her mama. I mean that as the ultimate expression of praise and honor of food. If ever one could capture the magic and decadence of cinnamon rolls in a cake, without the intimidating yeast, I think I have. Imagine a moist pound cake with a buttery cinnamon swirl dancing through the batter like a ballerina. Then, top that with the notorious cream cheese icing cinnamon rolls are known for. Bake this and get ready to slap someone.