Whether you Call Them Moon Pies or Whoopie Pies, We Call Them Delicious! 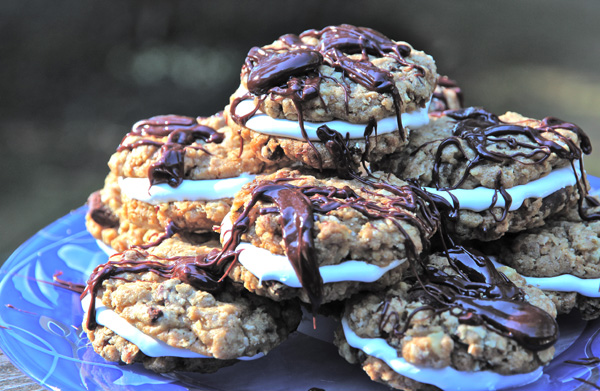 A version of these called Moon Pies appeared in a 2012 issue of Bon Appetit and I was immediately taken in by combination of oatmeal, brown sugar, chocolate and, in the original recipe, dried cherries. I had raisins around and had to try them. Immediately. Loved the result. (I added some cinnamon for spice, too). Don’t overbake the cookies. You want them to be chewy, with crispy edges to contrast with the smooth, creamy filling. The chocolate topping makes them very messy, but believe me, no one complains. I brought these to a picnic along with little wet-wipes in foil packets and people were diving for these before eating lunch.