A New Take on Clafouti 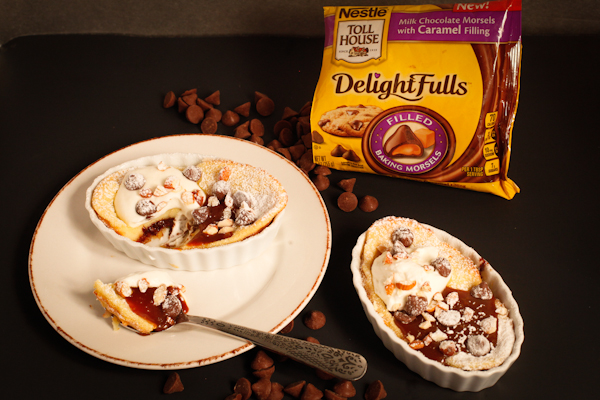 The classic Clafouti involves cherries but this one evolved during a “baketition” at Nestlé headquarters when I was visiting to celebrate the 75th anniversary of the semisweet chocolate morsel. A bunch of bloggers and chefs had come together, were divided into teams and challenged to come up with a dish in 45 minutes using Nestlé’s new DelightFulls, which are morsels with flavored fillings. There is semisweet chocolate filled with either mint or cherry and milk chocolate filled with either peanut butter or caramel. My team chose the milk chocolate caramel and got to work. We were working with Chicago pastry chef Amanda Rockman of Nico Osteria. 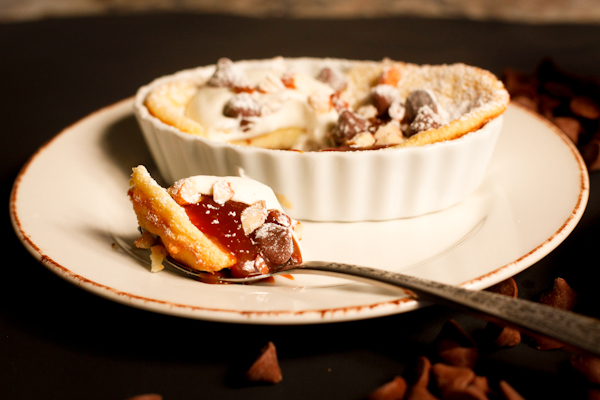 It was her idea to make the clafouti, I added the honey-vanilla bean whipped cream and our team got this into the oven in less than 10 minutes, I kid you not. Easy and impressive, especially if you use a purchased dulce de leche. Amanda used her own clafouti batter that day. I have tried to recreate our dish here for you. Chef Lucien Vendôme, the Director of Culinary Strategy & Innovations at Nestlé, said his grandmother – a traditional Frenchwoman – would have rolled over in her grave if she saw what we did to the classic dish. No matter, when you bite into the soft, eggy clafouti dotted with creamy Nestlé DelightFulls Milk Chocolate Morsels with Caramel Filling and topped with honey vanilla whipped cream, dulce de leche and chopped almonds, you will be thankful for our team’s creativity! This must be served warm, so plan your timing.