Sweet-toothed Bostonians and lovers of local history came together this weekend for the annual What the Fluff? Festival in Somerville, just outside of the city, where the second most popular peanut butter companion was invented in the early 1900s. A whole festival devoted to the marshmallow creme spread? Not a bad way to spend a beautiful fall Saturday.

Upon arrival, we were greeted by a man dressed as Archibald Query, inventor of Fluff. He served as the host of the Shenanigans stage, where activities like Fluff Jousting and Fluff Hairdos played out exactly as described. Kids poked each other with marshmallow-covered pool noodles, and a competition for the best use of  Fluff as hair gel gave parents a fun cleanup for the night ahead. Head over to Flickr to see one local’s pictures of the hilarious results. 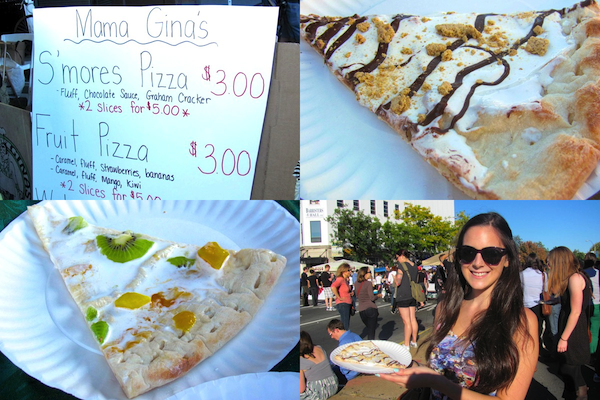 Of course, the best part of the festival was all the food and sweets surrounding us. There were freshly made waffles topped with a dollop of Fluff and chocolate, local students selling cupcakes covered with marshmallow frosting and rainbow sprinkles, and some snacks from a nearby pizzeria Mama Gina’s. The pizza was available in strawberry and banana, kiwi and mango (both with caramel sauce and Fluff) and s’mores, Fluff with chocolate sauce and crumbled graham crackers. This would be an easy and fun snack to make with kids, but keep in mind, there will never be an easy cleanup – it’s impossible not to get sticky when Fluff is your main ingredient! 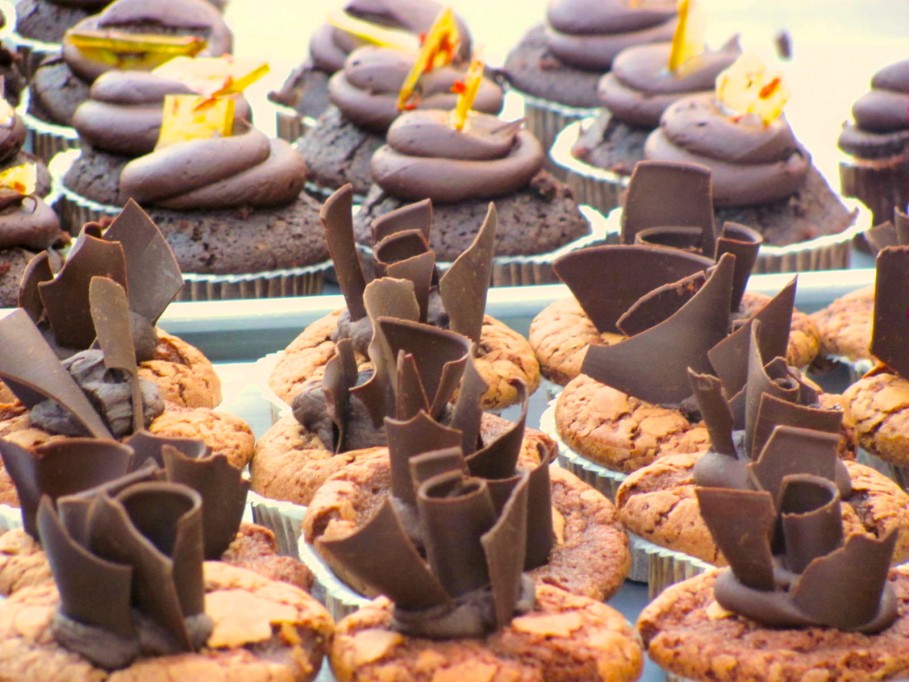 After the pizza, we stopped at the Kickass Cupcakes booth, an accurately named local bakery whose owner has competed on Food Network’s Cupcake Wars. They brought their S’mores cupcake (graham cracker cupcake with chocolate ganache and a toasted vanilla bean marshmallow, seen in the first photo), the Fluff Devil (chocolate cupcake with a Red Rooster Sriracha Fluff center, spicy chocolate icing and hot chili candy garnish – above, back); and Super Chocolate (chocolate brownie cupcake topped with bittersweet chocolate ganache and covered with chocolate shavings – above, front), all excellent examples of the, well, kickass flavor combos you can usually find at their shop. If you’re ever in town, this is one place you must try, and if you can’t get to Somerville, check out their Twitter page to see if their cupcake truck will be traveling to a location near you.

Oh, and there was also the grand search for the next Pharaoh of Fluff. Each year, festival-goers elect a new man or woman to be the highly regarded “leader of all things Fluff, bringing sweet joy to Somervillians everywhere.” We got a picture with last year’s winner Tara Costines before she handed off her title to the next lucky leader.

Little did we know the many ways you can use Fluff to satisfy your sugar cravings and come up with brand new hairstyles, but the festival taught us an important lesson: never underestimate the creativity of people with unlimited Fluff at their disposal.