Ben Mims on What Makes a Dessert Southern 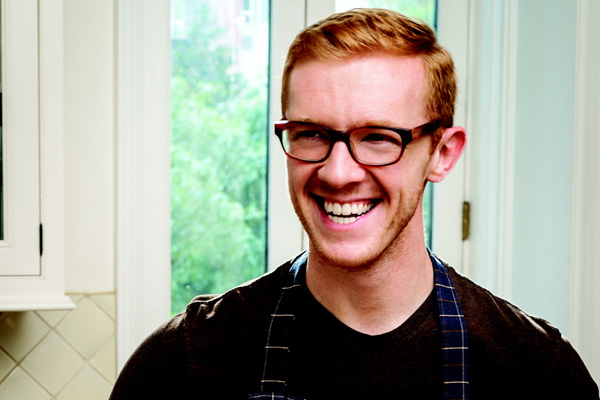 What makes desserts southern? We went to the source and chatted with Mississippi native Ben Mims, author of Sweet & Southern

about baking with Moms and Grandmothers, his favorite way to wrestle a fresh coconut and why his twists on southern desserts make sense for how we bake today. Ben spent time in San Francisco and now resides in NYC, but southern desserts are in his soul.

Dédé Wilson: Ben, thank you for speaking with me! I have been going through your book and have questions…first of all, what defines a southern dessert?

Ben Mims: Thank you for speaking with me, Dédé. You know I think historically maybe southern desserts were thought of as being overly rich…lots of butter, sugar…really, really sweet and really really fatty. You either loved them or hated them. Now of course this is a stereotype. We have such great ingredients: pecans, coconut, sweet potatoes, but the other thing that distinguishes southern desserts is how we have always taken these humble ingredients and transformed them into fantastic foodstuffs. Like biscuits! Flour, butter…basics transformed. There is also a history of graciousness. We eat in big groups down here. Think Sunday dinner! So desserts are going to serve 12 to 20 and we always have plenty.

So you baked as a child with your relatives?

Yes, with my mom and grandmother and aunts…every Sunday…you know the quintessential house on top of a hill in a pinewood forest with the aromas coming from the oven…cornbread, biscuits, fried chicken and there was always a coconut cake and caramel cake…sometimes both cakes for just 5 of us! Southerners like their desserts!

We would get cakes from a neighbor…what we call a cake lady down here. This isn’t someone who is a professional but someone who has made it their calling and makes cakes for community clubs and churches and the like…

Talk to me about coconut cake; it’s such a southern tradition…

Great question! People have ideas about what a coconut cake should or will taste like and I do have a story…we would get cakes from the cake lady and my Mom said you know you have never tasted what I think is the best coconut cake ever…that her Mom used to make. Well she had passed away before I ever met her and when I read the recipe I didn’t think it would be all that great. It was a white cake with coconut water, a 7-minute icing and raw coconut on top. No extract, no toasted coconut. And then I tasted it and was amazed. The simple coconut water soaked into the layers, the fresh coconut tasted so, well, fresh!

While I was at Saveur (Ed Note: Ben was associate food editor at Saveur magazine for 5 years) I bought an electric rotary coconut grater

from India and it makes the perfect shreds for coconut cake.

How great! A cross-cultural cake!

It does the job perfectly and effortlessly. You have to grab one from Amazon! Other graters make the shreds too long and chewy. This makes a superfine shred. I ordered 3 or 4 of these machines so that I never run out of them!

Oh, I am looking at them now! They look like torture devices (we laugh). What recipes did you initially learn on?

Biscuits and cornbread and every Christmas cookies to fill tin after tin, Bundt cakes, fruitcake and my Mom’s pecan pie, which is the best ever! It has a whole stick of butter and a good amount of lemon juice so that it isn’t cloying…and the butter is browned…it is amazing.

You mention fruitcake. Now I happen to be a fan, but you know all the jokes. You have a recipe for one laced with bourbon. What do you say to those who think they don’t like fruitcake?

The same thing I tell anyone who says they don’t like a particular ingredient or dish…that they haven’t had it prepared correctly!

For fruitcake I age the fruit, toast the fresh nuts…the aging mellows the flavor and alcohol and it becomes more than a cake, more than candy…it tastes like the holidays.

I couldn’t agree more. My Mom and I would make one doused with sherry. We would marinate the fruit before baking and then the finished cake would be wrapped in sherry soaked cheesecloth and aged. I was always picking at them. I didn’t want to wait!

Give us 3 things home bakers should know to help them succeed.

Hmm, oh wow. Well, this is very specific to southern baking but caramel frosting is notoriously tricky! It took me 10 to 15 times to get it right. Most recipes say to cook it until 240° to 242°F. I say take it off early at about 234°F…there is residual heat at work. Also sometimes still in very humid or hot whether it might not work. And I always use a copper pot…it helps keep the frosting warm and fluid; it won’t harden so quickly in the pan.

We just did a photo shoot here with Caramel Frosting and I told Peter (our staff photographer) that he had to be ready to shoot. Like really ready. Like a 15 second window to get it the frosting while it was fluid!

Home bakers don’t think about the residual heat. Also, I tell them don’t even start to make your frosting until your cake is completely cooled and ready to go.

Another tip is about upside down cakes. Recipes call for heating butter and sugar, placing fruit on top and then pouring on the batter but when you do that it pushes the fruit around so it doesn’t look so nice once its unmolded. I have found that once you cook the butter and sugar, by taking it off the heat for about 3 minutes and then placing the fruit and pouring over the batter at that time, that these techniques make the cake as beautiful as people have in their minds.

Yes. You can cut corners, but only where you can –you have to know where. Baking doesn’t have to be laborious. For instance I haven’t greased and floured a pan in years. I use spray that combines grease and flour; so much quicker.

How about bleached versus unbleached flour?

I use unbleached, but I don’t get preachy…I actually have a recipe for homemade corn syrup in the book, but if someone wants to use Karo, who am I to judge?

I like to use ingredients in different ways, like I use jam as a thickener in pie. It is fruit and sugar and has body…I want to make my recipes unique and special but also easy and approachable.

We are going to feature the Coconut Lime Cornmeal Pound Cake and the Sweet Potato Cake. Any special tips?

For the pound cake it’s pretty straightforward. I originally developed it as an easy bread to go with a curry chicken salad, so it isn’t too sweet. It is very versatile.

For the Sweet Potato Cake, don’t be scared by the components. There are a few but don’t skip them. The pecans, for instance, really add to it…texture and crunch. It is meant to be impressive but you can make it in stages. And don’t be afraid of stacking it; it’s actually quite sturdy. The 7-minute icing isn’t slippery. There is a fair amount of work but you will get 10-fold the response. People will think you slaved over it.

Ben, we are ready to make that cake! Will be perfect for the Thanksgiving table.

Dédé it’s an honor to be part of Bakepedia. Thank you.

Hey, we want our community to know about great bakers like you. Good luck with the book…and I am going to seriously consider buying one of those coconut graters!