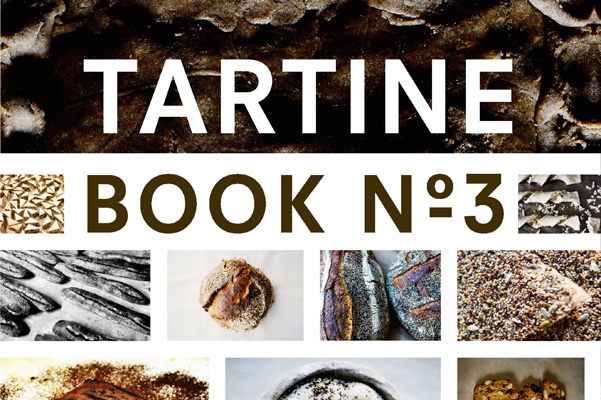 Chronicle sent me this book and as soon as I flipped through the pages I was simply floored. I get a lot of books to review, and frankly, being the cookbook hoarder that I am, it is always somewhat exciting. This book, however, is one of those that jumps out at you and demands your attention.

The book is named after Elisabeth Prueitt and Chad Robertson’s San Francisco Tartine Bakery. They launched their writing careers with their first book, Tartine, which covers pastries and some savory items, then produced Tartine Bread, to concentrate further on their bread offerings, and now comes Tartine Book No. 3. The subtitle description is “Modern, Ancient, Classic, Whole”. Robertson is the man behind the bread and these descriptors do a good job of conveying his current philosophy and techniques. He has carried out a huge amount of research on creating a modern day approach using ancient grains, incorporating traditional methods with newfangled ways. Specifically, this book is about working with natural leavens and custom flour blends to build flavor and create texture. The results are breads with intricate, sophisticated, nuanced qualities while being basic and whole and elegant in their simplicity.

In the Introduction Robertson describes the most recent evolution of bread baking and credits Parisian Lionel Poilâne with reinvigorating the search for a bread with “heart and soul” – le vrai pain –in the 1970s. Bakers all over the world took note and now naturally leavened breads can be found far and wide. In Robertson’s words:

“…it was clearly time to force a creative push for our team…Respecting the foundation our reputation had been built upon, the need to shift techniques and utilize new ingredients became the driving inspiration and challenge for this book…I chose to focus on the transformative action of the leavens and the vastly different ways natural fermentation could add character to bread”.

One glance through the book and you can immediately see Robertson’s unique approach. There are breads here that don’t look or sound – or most importantly taste – like any others: Purple Barley Amazake seeded bread, Double Fermented Pumpernickel, Sprouted Buckwheat-Einkorn Bread, Spelt and Toasted Corn-Flour Baguettes, Rye Porridge Bread, and a variety of crispbreads, such as the Kamut Crispbread below. When I saw this image, I was taken in by its sheer beauty. I don’t think I have ever thought of bread as being breathtaking before, but you tell me what you think… 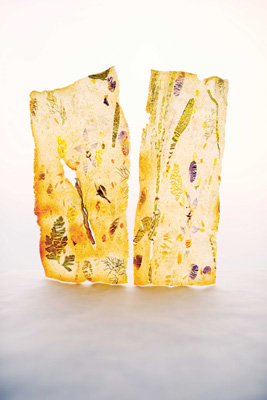 Robertson delves into the sweet side of things a bit as well exploring lesser known and used sweeteners such as unrefined and partially refined sugars – jaggery and muscovado and honeys ranging from eucalyptus and star thistle to borage. The Pastry section includes: Croquant d’Amandes, Chamomile Kamut Shortbread, Piloncillo-Nib Rochers, Buckwheat Hazelnut Sablés, Gougères made with a Rye-Cocoa Pâte à Choux and Inverted Spelt Puff Pastry Dough that he spins into Palmiers made with date sugar, fennel and sesame seeds.

One could say that every cookbook is its own treatise, but some simply have a stronger, more individualized voice and this is one of those books. One of my biggest pet peeves as a writer is when people say “most unique” or “more unique”. Unique means that something is matchless; it is a one-of-a-kind. It is not grammatically correct to add those adjectives, but man, I want to now! Robertson has written a book for serious bakers. This is a heavy book, literally (over 300 pages) and figuratively. It is a book and an approach to study. To read and re-read. The recipes are to be tried and tried again. The book is about a learning process, about experimentation, about absorbing Robertson’s philosophy to the point where you can then branch out on your own. If you think of yourself as a bread baker now, order this book. It is unlike any other in your collection and will open your eyes to a whole new world of bread-based creativity. If you lean more towards the sweeter side of baking, Robertson brings you thought provoking recipes such as those mentioned above along with Nut Milk Pastry Cream, Zucchini Kumquat Tea Cake and Lemon-Poppy-Kefir Pound Cake.