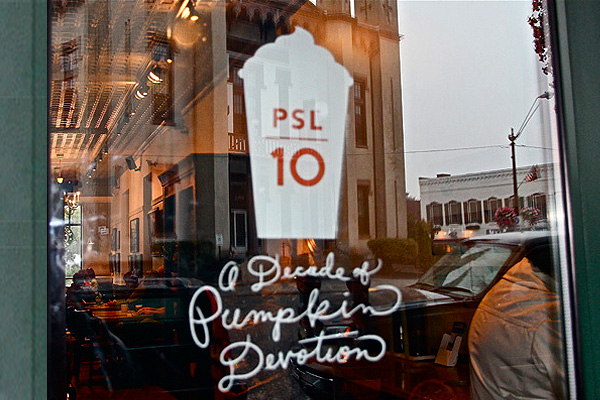 We know a bunch of folks who say Fall officially begins when the Starbucks Pumpkin Spice Latte arrives, or the PSL, as the baristas call it. As their own site describes it, the highly anticipated seasonal drink is made with “espresso, pumpkin-flavored syrup and steamed milk, topped with sweetened whipped cream and pumpkin pie spices.” The coffee brand also proclaims that there have been over 29,000 tweets featuring the hash tag #pumpkinspice since August of 2012. No wonder it has a huge fan base and is still going strong 10 years after it debuted!

This week we headed to our local Starbucks with six of our girlfriends and ordered up several pumpkin spice lattes and a selection of baked goods to give you the lowdown on the best pairings offered from their bakery case. Here is what we ordered: 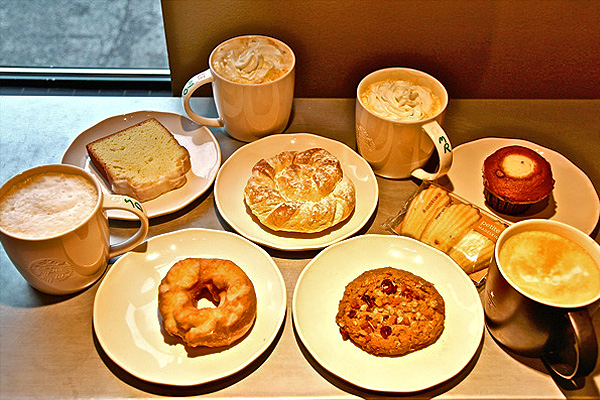 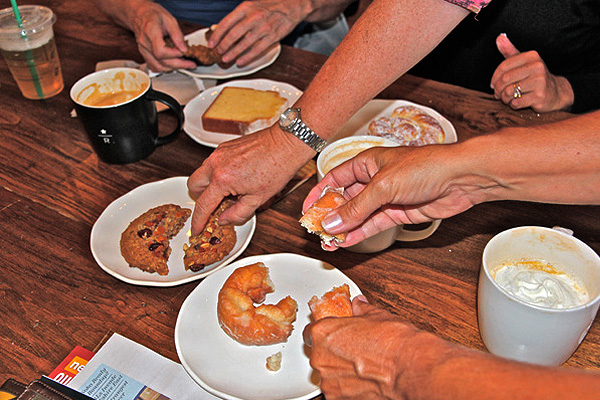 Our group collectively agreed that the famous pumpkin spice latte had great flavor balance and was not as sweet or overpowering as they had expected; the decaf version also tasted just as good as the regular. The soy lattes, however, were very sweet, but that’s because Starbucks uses soy milk that is very high in sugar. If only they had soy milk with lower sugar content available… Are you listening, Starbucks?

As for the food, most of the group leaned towards the milder baked goods as the best choice, however there was a big exception with the Mallorca sweet bread. While this is a very subtle sweet bread, it did not get high marks.

“Tastes like a dinner roll with powdered sugar on top,” said one friend. “If I were home, I would split it, toast it and slather it with jam and then, perhaps, it might be worth the calories.” Consensus: Too dull.

The iced lemon pound cake was a hit on its own, but no one liked the way it tasted with the PSL; the flavors just did not mix well. The latte also competed with the oatmeal cookie, which was quite good separately as well with its chewy texture. It featured many kinds of dried fruit and the group agreed that a plainer oatmeal cookie would have worked better.

The glazed doughnut fared all right, but did not make the top spot simply because it wasn’t a fabulous doughnut to begin with, even when dunked.

In our number two spot, however, was the pumpkin muffin! Its own pumpkin flavors blended harmoniously with the hot drink.

Our favorite pairing came as quite the surprise! The packaged madeleine cookies were bought almost as an afterthought, but they turned out to be our favorite choice. Who would think that a pre-packaged sweet could compete with those coming fresh out of the bakery case?

“You need something simple. Something plain,” said one friend.

“I like the coffee and I want a pastry that enhances it and doesn’t get in the way of the pumpkin and spice flavors,” mused another.

(By the way, all of the testers had just come from their respective gyms and wanted everyone to know that they had just worked out – note their electronic gym passes. Everything in moderation).

In the end, the pumpkin spice latte was given high marks, especially when paired with the madeleine cookies and pumpkin muffin. We all yearned for a plain pound cake to snack on, however, so we think your best bet would be to bake up our Cream Cheese Pound Cake and head to your local Starbucks and get a PSL to go while the cake cools. There’s nothing like freshly baked cake to make a seasonal drink so satisfying.

And if you want to make an almost instant PSL at home, Starbucks now offers a Pumpkin Spice Via. Enjoy!

Note: We are in no way affiliated with Starbucks. We just know how much you love pumpkin spice lattes and wanted to find the best way for you to enjoy them!