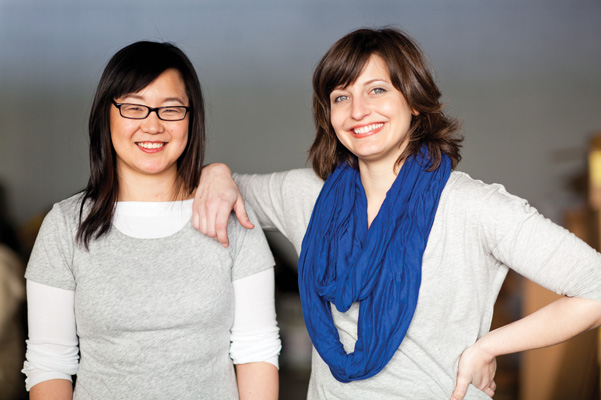 Liz Gutman (right) and Jen King (left) met at the French Culinary Institute (FCI) in 2007 and immediately found a shared loved of sweets, which they brought to market in 2009 at the Brooklyn Flea Market. Early publicity brought enough attention to convince them to make a full-fledged business of candy making. Their book, Liddabit Sweets Candy Cookbook, was published by Workman in late 2012 and they just opened their first flagship store at the Chelsea Market, joining such businesses as Sarabeth’s, Ronnybrook Dairy as well as Amy’s Breads.

I came across Liddabit Sweets at the Fancy Food Show this summer in New York and was immediately drawn in by their delectable candy and the very accessible way with which they teach the home cook through their recipes. I sat down to chat with Liz about their burgeoning business. 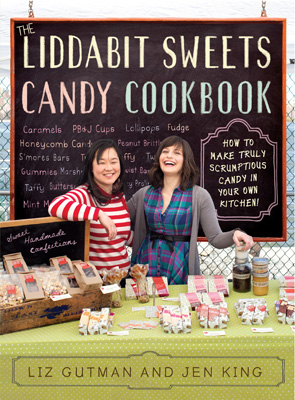 Dédé Wilson: Liz, thank you so much for taking time with us. We need more candy on Bakepedia!

Liz Gutman: Everyone needs more candy! And I love talking about it!

When people ask “What do you do”, what is your answer?
I say I co-own a candy company and people go, “WHAT?!” (laughs). I think its one of those childhood fantasies that no one actually thinks anyone does in real life.

What is your favorite part of what you do?
I think it’s when I get to interact with people, whether its an event or doing a demo and you get to watch someone try a taste of something for the first time, seeing the reaction. That’s why Jen and I got into it – to make people happy!

How are you inspired to create recipes?
It always comes from random places. I have to cop to the fact that Jen comes up with most of our new recipes, but it can be a new dish that one of us has tried or that we have read about, or we see a sign on the way to work – it comes from all over the place. We take inspiration from classic and nostalgic candies, like our Tallyho. It’s like a double-decker Mallowmar with a combo of graham crackers, chocolate and marshmallow. We had to have a candy with those flavors.

Do you have a moment, event or recipe from your career of which you are most proud?
Yes. The recipe is the Beer and Pretzel Caramels. It’s often me and Jen in the kitchen, or just Jen, but that one is the only recipe that I came up with, developed start to finish. I’m super proud of that one, the laurel upon which I rest. I’m done here (laughs). But also the book being published and then nominated for an [International Association of Culinary Professionals] award and now our store. The last few months have all been big ones.

For Jen she might say the chocolate nougat in the Snacker Bar [like a homemade Snickers].  We took months perfecting that recipe, getting it just right. She wasn’t going to rest. It would be a little but too chewy, or too creamy or a little too this or that and it wasn’t working for a long time. But she got it down! And now she can nail it every time; it’s pretty uncanny. And the recipe is in the book with great instructions so you can make it, too.

What are the three most important things that you think the home baker should know?
1. Read the recipe all the way through before you do anything! People get intimated, especially with candy making. They see they have to weigh things and get scared. Instead of thinking of candy making as more complex, think about it as just having to be more organized. Read all the way through at least once, maybe a couple of times, it’s like a rehearsal. And measure your ingredients out, then you won’t panic in the middle of the recipe. That’s where you can get into trouble because some candy demands exact timing.

2. Make sure you have the right tools for the job. A well-written recipe will tell you that you need a candy thermometer, for instance, then you will have everything ready to go so you are not scrambling last second.

3. Keep a sense of humor. Its just food. Speaking as someone who is a perfectionist, a lot of us are, it’s a personality trait a lot of pastry chefs share, and if it goes wrong it’s the end of the world and it sucks and you think you should throw it away, but hey, it’s just candy! If it doesn’t turn out – you will make recipes that don’t work the first time – if it doesn’t look great, I bet it is still delicious. Or break it up and re-melt it. Keep that sense of humor! You need that for running a business too. There are bigger problems in the world.

Tell us a little bit more about Liddabit Sweets Candy Cookbook. What did you hope to accomplish?
We wanted a conversational tone, accessibility, and we tried to bring humor. All the candy books on the market were one of two things: either very beautiful or very technical but nothing had a wide range of subjects that had recipes that you could make in five minutes side-by-side with weekend projects, and was entertaining, too. Accessibility was the watch-word. So many people think they can’t make candy at home, but think about it. Generations ago Grandma had taffy-pulling parties; home cooks have not always been afraid. Now that people are getting into cooking at home, candy is like the final frontier. They started with making dinner, then baking, now it’s on to candy!

We are trained pastry chefs, but as far as confectionery, we are self-taught. We learned from trial and error. We still do that, that’s how we come up with new products. We wanted to bring this to home cooks, our professional training combined with what we have learned as self-taught confectioners.

We are going to feature a recipe for your Buckeyes. Anything words about that recipe?
It’s super simple and crazy delicious. When we made them for a friends wedding, some people thought they sounded boring, but then they tasted them and were blown away. You work around candy long enough and you think, whatever, it’s been done, but really often the simple combos are the most delicious and most comforting. Peanut butter and chocolate, sweetness, saltiness – the recipe suggests a Skippy-type peanut butter. We use a no-stir peanut butter from the Peanut Butter Company. You could use natural, but the oils will separate out again after the candy is made. There is a potential hazard for that. A candy hazard!

What about the type of chocolate?
It’s easier and easier to find decent chocolate in the supermarket or big box stores. You can often find Ghirardelli and Guittard and both are great. We do mention in the book that chocolate chips are made to hold their shape and not suitable for dipping and coating, so don’t use those.

Liz, we feel set up for candy-making success! Thank you so much for your time.
My pleasure. Let us know how the Buckeyes work out!