Do you know Dominique Ansel? If you think you don’t you are probably wrong as he is the inventor of the Cronut™ – that croissant/doughnut hybrid that took the world by storm. His newly published book, Dominique Ansel: The Secret Recipes

does indeed include an at-home recipe for his famous mash-up, but it also includes a lengthy essay he titled The Real Cronut™ Lesson. Dominique explains how the invention was born simply through the creative process that he tries to employ on a routine basis. As the hordes of customers began to line up outside his NYC bakery, even hours before opening, he and his team decided to do the unthinkable – to somewhat ignore the success of the Cronut™. What matters to Dominique is the continuous process of creativity and he wasn’t going to let the Cronut™ be his sole legacy. To quote, “Few things are defined by the moment were born, but rather the story they lived through. The real secrets lie not in the recipe for the Cronut pastry, but in the infinity that lies ahead of it.” You will find this kind of philosophical approach throughout his writing and indeed the first half of the book is Dominique expounding on everything from “Time Is An Ingredient” to “Inspired by a Peep”, Breaking the Soufflé Laws” and “ The Sunflower Tart Illusion”. This is a book for those interested in solid technique but also for those who think about – and are inspired by – their food. 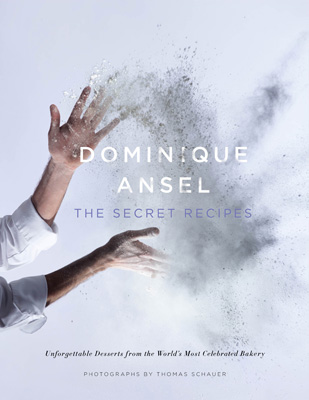 Dédé Wilson: Dominique, I truly appreciated the first half of the book. I love your writing style and your highly philosophical approach to food. I share your viewpoint that so much of what we experience with food can be traced to moments in time – singular events that imprint taste, texture and aroma and even sound upon us, as well as emotions. You mention the warm baguette that you cradled between your legs as a child, driving home from the bakery with your father as having a major impact upon you. Can you share with us a recent experience where a baked good or dessert made a lasting impression?

Domonique Ansel: I recently walked past Chinatown and in the crowded alley I was pushed into a small shop where they were selling fresh soy milk tofu pudding – served warm with ginger syrup on top. It was nutty — almost in a slightly savory way — and had the silkiest texture of the softest panna cotta. The flavor was so clean it instantly cut away everything else, including the noise of the traffic in cars. I remembered zoning out to just this dessert.

Dédé Wilson: I loved your treatise about “what purple tastes like”. It makes me think about how when I was growing up in 70s America and Jell-O was a common snack that we routinely referred to as “red” or “green” instead of strawberry or lime or what have you. Here’s a challenge for you. The holidays are coming up and everything is “pumpkin”. What do you taste and think about when you “taste orange”?

For me, orange is all about citrus — there’s always a sharpness to it, but it has rounded edges and floral and sweet notes. Don’t think “sour”; think “bright”.

Any Recipe. I love this dessert…because it is something I’ve never done before…

Dédé Wilson: Dominique, thank you so much for your time. We think your book will make a perfect holiday gift for those who take both an intelligent as well as emotional and creative approach to their baking – and who want a well-written, heartfelt read.

Thanks so much Dédé. I hope it brings you a little inspiration — to cook or just to eat.

We will be highlighting your  and your Mini Madeleines and Flourless Chocolate Pecan Cookie.