We know the fancy Parisian-style macarons are all the rage right now, but there’s still a special place in our hearts for the classic coconut-based macaroon. Sound like heaven to you? Then The Macaroon Bible

by Dan Cohen will be right up your coconut-strewn alley. He is also the owner of Danny Macaroons, which you may have come across in Chicago or New York. These chewy confections of yesteryear were typically quite basic – plain or chocolate or maybe chocolate-dipped – but Dan brings us Red Velvet Macaroons, Salted Caramel Macaroons and flavors like Guava and Hibiscus. 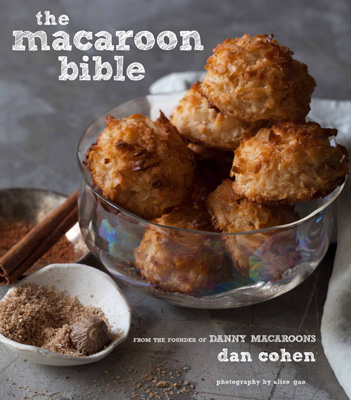 Danny, thank you for taking the time to talk shop with us. I had to keep explaining to people that this was going to be about macaroons, not macarons, which amused me because at one time all most of us knew was coconut macaroons! Are you sick and tired of the confusion?
Ah yes the macaroons vs. macarons issue, you would think we would be beyond that by now. We set up at artisan and farmer’s markets and there are a lot of Korean shoppers at this one market – the Koreans love Parisian macarons – so I will see a group of young Korean women approaching and obviously someone has told them that there is a macaron vendor, and they are searching us out and they look so excited, then they get close enough to see what we actually have on the table.

And they don’t see all the pastel-colored orbs but instead your mounds of coconut cookies.
Right, and then they start looking confused and when they are about five to 10 feet away it’s like – abort mission! They start making a U-turn. I am so used to this by now. In the beginning I was annoyed, even the press confused us and called us macarons, so of course people get confused. What’s going on? Why aren’t they pretty pastel sandwiches? (Laughs.) It’s part of the game.

How did you start making macaroons?
I was in software, working as a startup project manager. Before that, I was with a sports media startup. I was doing nothing in food at all. Then I made some macaroons for Passover. I was a freshman at Amherst [College] and was talking to a friend about going home for the holiday and he said the one thing he was most looking forward to was having macaroons. I though, Hmm, okay, but they hadn’t been part of my family traditions, so I couldn’t really relate. I asked my Mom how come we never had them and she said if you want them, then you should make them. So I did! I made a couple of batches and people seemed to like them. Then one year I was at my uncle’s house and his 90-year-old mother in law was there and she said, “These are so delicious you should sell them.”

Well, I didn’t like baking and I don’t like sweets and I told them I was just doing it for them, but then two weeks later I was in an expensive coffee house and they had no food and I asked them about their food situation. Next thing you know, I am offering to bring them some freakin’ macaroons, figuring maybe we would trade or something. They said sure, then two other shops said they wanted them. Two or three months later, a box makes its way to a friend’s boss at Bergdorf Goodman and they love them and their restaurant people love them and they want to carry them. At that point I am thinking, Bergdorf’s is a real place! So I made them for the café on the fifth floor and I am delivering them in little Tupperware containers and that lasted for two years.

So you kind of built the business, despite not liking to bake!
Yeah, some people do Etsy or go into retail, but then you have to think about packaging and I didn’t want to do that. We don’t have any retail at the moment. We have a kitchen in Spanish Harlem and we are looking at production space in Chicago. We already have 20 accounts or so there. It is where I am based at this point.

Do you have a moment, event or recipe from your career of which you are most proud?
This has all been so unplanned and so serendipitous, like every time something happens, it’s a total blessing. From where I started, I never thought I would have a company that made coconut macaroons and here I am still doing it three years later. But you know what is really the best? That I am giving people jobs. That I created something that employs people, that pays them and they can be proud of, that is the most singular thing.

Tell us more about The Macaroon Bible.
An agent approached me; they had seen a video of me making macaroons and sent me an email asking whether I was writing a cookbook or interested in writing one. I said no, I’m not, and no, I’m not interested one. But then I thought, well if they wrote me to ask me, then they must think I can do it. I was one and a half years into the business, I don’t even think I had even hired an employee yet, so we had lunch and the agent explained it.

How was it when the book finally arrived in your hands?
Amazing. I think it sweetly represented all this work in a tangible form and it is dear to me. It is way more beautiful than I thought it could be. To most people it will be a book on a shelf, but it is astonishing to me, leaving a permanent mark somewhere. We all do lots of things throughout our lives, but that fact that there is recorded evidence, there is often no physical copy of so much if what we do.

Did you ever tell the 90-year-old woman that she inspired you?
Oh definitely! The book is dedicated to her and she came to the release party and was flattered and so sweet. I didn’t tell anyone, and then my aunt and uncle got the book and saw the dedication, “For Evelyn.” They were all surprised.

We will be featuring your Salted Caramel Macaroons and the Eggnog Macaroons. How are you inspired to create recipes?
Oh, inspiration comes from all over. The Salted Caramel came from a misunderstanding of a tweet. I was trolling Twitter looking for flavor ideas. I saw a salted caramel macaroon, but they meant macaron! But it can happen walking by Starbucks or the Cheesecake Factory, from all over, really.

Danny, thank you for taking the time.
I am so flattered that people are interested.

Well, we have to put that macaroon/macaron thing to bed!