Carolyn Wyman on the History of Chocolate Chip Cookies 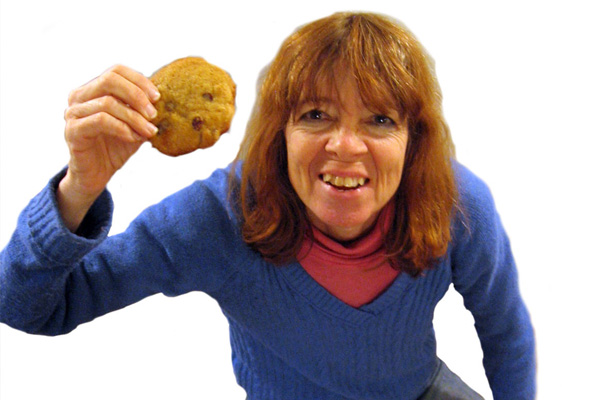 Carolyn Wyman first came on my radar years ago when I picked up her books Spam: A Biography and Jell-O: A Biography. I thought, this is a woman I would love to hang out with! She describes herself as a journalist and researcher and has carved out a niche applying her skills to some of our most beloved supermarket products. She spent some time with me on the phone to discuss her newest book: The Great American Chocolate Chip Cookie Book

Dédé Wilson: Carolyn, Thank you for taking the time to chat. We share a lot of enthusiasm for the same foods. Where did your original fascination with Spam and Jell-O come from?
Carolyn Wyman: I grew up on those products. What’s weird about me is that unlike a lot of people who write about food, I grew up on convenience foods – post-war processed foods, any kind of Hamburger Helper, that sort of thing. My mom worked as a teacher and embraced things that got meals on the table, and yet there was a high value placed on food. We would drive an hour for a guy that sold corn out of his truck because it was the best. Mom was also very fussy about commercial products. Duncan Hines was the cake mix; she never bought another brand, so in some ways there was a certain gourmet-ness.

So how did this lead to the Spam and Jell-O books?
My Dad was a newspaper editor; I became a newspaper writer. While my mom had her go-to products, she also was always on the lookout for what was new. Even when I was older and away at school, she would call me and tell me about the new chocolate Cool Whip. It was never, “How are your grades?” (Laughs). Eventually I started doing a newspaper column reviewing supermarket products.

Where did you start?
The New Haven Register. I worked with Bonnie Tandy Leblang, who is a dietician. It was like point/counterpoint. [Ed. Note: These gals had been dubbed the Ebert & Roeper of food.] Our column was the syndicated Supermarket Sampler. We had the column for 25 years, retiring it in 2012. We would talk about new food products every week.

So writing in general and writing about popular food products in particular lead you to your book topics?Exactly.

So as a kid, were you baking from the recipe on the back of the bag?
Mom and then me, yes, that was it! And it was a real treat because she didn’t cook from scratch much; that’s as close as it got.

Anything really surprise you during your research?
A number of things. The thing I am most proud of is my research into the origin of the recipe, how Ruth Wakefield came up with this cookie. The history as we have known it – even as described on the Nestle site – is not right. Most of the way the history is presented is that the cookie was invented by a mistake.

[Ed. Note: The story on the Nestle site describes Ruth making a Butter Drop Do cookie, cutting up a bar of Nestlé semisweet chocolate and adding it to her dough. She expected them to melt; instead, the chocolate held its shape.]

I absolutely believe she knew what she was doing. She was a marketer, a businesswoman and a trained cook with training in nutrition. Like any good restaurateur, keeping the menu fresh was important. She went on winter trips around the world for inspiration for menu ideas. Like any smart person, she thought a lot about her business and how to improve it.

So you think she knew the chocolate wouldn’t melt? That it would behave as it did? How did you discover the real story?
I was doing original research through Nestle headquarters and also at Ruth’s alma mater, Framingham State University. I kept digging. They had her cookbook collection and many collected clips, file folders filled with information. They get a lot of requests for information and have a standard package that they send out, which I had received, but then I went there to see if there was anything else. The archivist kept saying they had sent me what they had and I was about to leave, but then they let me browse a little more. I started uncovering stuff they hadn’t sent.

That must have been exciting, reading the clips and realizing you were rediscovering something.
Oh yes! And it doesn’t take anything away from the history. I found clips of her talking about the invention of the cookie both from the time of its creation and also much later. Now we have Heath Bar ice cream and Oreo ice cream, two items in one, but at the time this was just not done. She was an innovator. To say it was an accident doesn’t credit her with her smarts.

Were there false starts with your research?
Sure. The Nestle site presents the “mistake” theory. I had to spend a long time finding the original research, but I had a feeling based on the person she was – a taskmaster, organized – that there could be another story. Even waitresses from her Toll House restaurant that I interviewed said that she planned everything out.

(Ed Note: In Carolyn’s book, she describes how Ruth insisted on silverware being set exactly one thumbprint from the table’s edge or the entire table had to be re-done, shoes had to be clean, stockings straight, uniforms freshly pressed. My favorite quote from Carolyn’s book recounts some verbiage from Toll House press material in Ruth’s own words: “No military machine or factory production line was ever geared to more smooth-running cohesion. Long-range planning and constantly studied personnel are reflected in an operating teamwork flawless in its unruffled perfection. Confusion is unknown.” This certainly does not sound like a woman who is prone to mistakes).

Fast forward to the 1970 and 1980s and the proliferation of Famous Amos, Debbi Fields and David’s chocolate chip cookies. These were the first commercially available “gourmet” cookies. Tell us about these brands.
Each one of these companies created a singular approach. Amos was smaller and crunchy and contained coconut. Mrs. Fields joked – or perhaps it wasn’t a joke – that she made her cookies huge so when her husband and friends asked her how many cookies she ate every day, she could just say one or two. She also was charging a lot, so you had to provide value.

In Ruth’s day or her Mom’s day, cookies were more austere, even called biscuits, more European, crisp. Americans are about bigger, being indulgent, so when David Liederman [of David’s cookies] arrived on the scene he made a big cookie and used Lindt chocolate for a very upscale taste.

When you bake chocolate chip cookies, what kind do you make?
As you gather from my book, I am more of a reporter than a recipe developer or foodie. I eat an enormous amount purchased at bakeries. There is no chocolate chip cookie I don’t like. Well, I don’t like a straight Chips Ahoy. Keebler Chips Deluxe, I like that cookie. When I make them myself, I basically go to the Nestlé recipe.

Do you have a favorite from the book?
Yes! The All-Grown-Up Chewy Chocolate Chip Cookies.

Getting back to Ruth. She used a Nestle semisweet chocolate bar and cut it into chunks for her cookie. Nestle won’t tell me what percentage chocolate was in that bar.
They might not know! They aren’t as much about the history as they are about promoting current products. They aren’t as fussy as you are! (Laughs.)

That’s one of the things I love about chocolate chip cookies.

Many people who don’t bake from scratch do bake chocolate chip cookies. The basic recipe is forgiving. You can do it on a high level and make them fussy and complex or you can throw the dough together or be an 8-year-old and produce something that tastes pretty darn good. You can’t say that about a lot of baked goods!

What chocolate chip cookie trends do you see going forward?
There are only so many ingredients, so it’s often about little changes like using bread flour to create a different texture. The inclusion of baking powder, like the famous Levain cookies, is another change that affects texture; it makes them a bit doughy. I think it is interesting how the modern day “gourmet” chocolate chip cookies feature chunks [as opposed to chips] and this is really a full circle back to the original concept.

Carolyn, we are thrilled to introduce our readers to your newest book, The Great American Chocolate Chip Cookie Book. It is jam-packed with history, insight and dozens of recipes from versions of Famous Amos, Mrs. Fields and David’s as well as those from bakeries, contests and more. Thank you for your time.
My pleasure Dédé.

Find Us in Fancy Flours This Month!
Edd Kimber On Why Family is His Favorite Ingredient