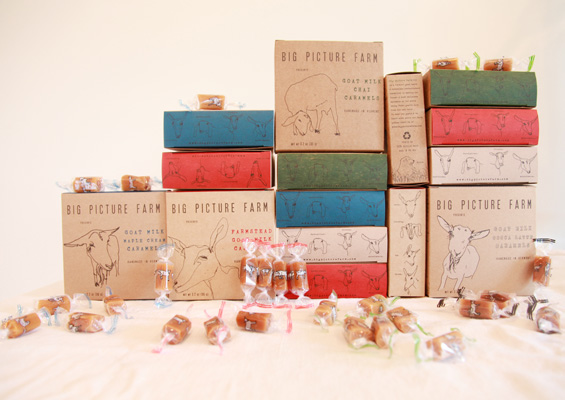 I had seen boxes of Big Picture Farm caramels in our local Whole Foods store, but it wasn’t until I met the owners at a trade show that my interest was really piqued, and it was all because of the goats. Their display was as much about the goat milk caramels –with flavors like Cocoa Latte, Chai and Maple as well as their Original – as it was about their herd. Pictures and drawings of the “girls” (their milking goats) were everywhere: on packaging, their table, the backdrop, all the signage. It was apparent that the animal husbandry aspect of their business was just as important as the food product, which I found intriguing, being such an animal person myself. 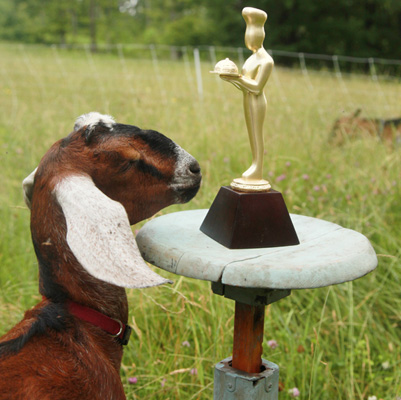 Turns out that they have been recognized by animal welfare organizations for their good work. The candy itself has been awarded as well. The image above is of Junebug, one of their Nubian girls, gazing with appreciation upon a 2012 SOFI (Specialty Outstanding Food Innovation) Award for Outstanding Confection, given by the National Association for the Specialty Food Trade. The flavors are subtle, but true and natural. The impression is of a sophisticated, quality artisanal product. Check out our review.

Bakepedia: Louisa, it is so great to finally be speaking with you. You know through our correspondences how much I’ve been looking forward to talking about your “girls.”
Louisa Conrad: Well, Dédé, we do love our animals dearly and they take up our time. I work for them!

You chose a labor-intensive business! Tell us how it all started.
We lived in Vermont. I was teaching art, my husband, Lucas Sarrell, was teaching writing and we had a four-month gap of time. He had students whose family ran a goat-cheese farm and we decided to apprentice with them. I have always loved goat cheese and we were ready for something new. Of course, I had no idea I was going to fall in love with the goats! We came away saying that we had to figure out a way to live like that, have a life like that. It really spoke to us. So we brainstormed and goat cheese didn’t seem like the way to go. We were in Vermont after all, surrounded by so many great cheese makers already, and many of them were friends. We then apprenticed with a farm that had sheep and goats. I started playing around with the goat’s milk trying to make caramels and they came out pretty well. The farm owners sold their cheese at farmer’s markets and encouraged me to bring the caramels to see if people would like them.

Ah, market research right off the bat! That sounds like it was a perfect situation.
It really was. I didn’t even have packaging. I sewed little bags to hold the caramels and we did this every week for three months and got tons of valuable feedback – this is too hard, or too soft or too sticky. I was really working on the recipe constantly. Then, that fall came (2010) and I felt confident enough to tell friends and family that I was willing to take holiday orders. So it really started at farmer’s markets and then we went online.

Do you ever do any cheese?
We are still very new. We bought our farm end of last fall but we have 1,000 pounds of cheese aging right now. We will probably debut it this fall. We have the candy in about 30 or so Whole Foods around the country and many independent stores as well.

Tell us about production. How does it work? Don’t you have to milk goats twice a day?
Yes, and it is three of us right now for a herd of 40 goats, although we have other workers at various times of year. The batches are almost made to order. The order comes in and goes out four or five days later. We cook about eight batches a day. It takes three hours to cook caramel and there are about 700 caramels in a batch. Last October, we were cooking around the clock. The shelf life is about two to three months.

Did you have any kind of a cooking background?
No, I didn’t, but I have always had an incredible sweet tooth and also a good taste memory. When I was a kid, my parents had European friends who would send us this British toffee every Christmas and I thought it was the most delicious thing ever! So that was the flavor I aspired to. I just kept cooking and cooking test batches. We had pigs at the time. They got a lot of caramel cast-offs. We were in 12 stores before we even had the electric cookers that we have now. We still do everything by hand, but in the beginning it was especially labor intensive. We were in Murray’s Cheese in NYC pretty early and I would cook and cook and throw away a lot of caramel. If it wasn’t right, out it went. I read a lot of science texts, any research I could do to improve our product. We do it all. I did the drawings on the packages as well.

You did? That’s amazing; you are multi-talented! They are drawings of your actual girls, right?
Yes, and believe me, just like the drawings, they all have individual personalities. Many of them are quite diva-like.

Tell us about how you chose the breeds that you have, and how old the goats have to be before they produce milk.
We fell in love with the Saanen breed [from Switzerland] when we were apprenticing. I seriously had no idea that goats were so loveable. We received some goats as wedding presents! It was kind of like, okay, now we have to do this (laughs). Fern was our first goat and was named after the person who gave her to us. In fact, the goat’s all have names that have meaning, either friends, family or some association. We also have French Alpine goats and Nubians. They are the ones with the floppy ears. We are a young farm; we launched this line 2011. Typically at large commercial operations they will wait for goats to be 3 to 5 years of age when they give most milk, but they can produce until the ages of 8 or 9.

So you blend the milks?
Yes. The Nubian’s milk contains more fat; the Saanen makes more milk but less of a fatty milk. We milk twice a day and get the milk to 38˚ within a half an hour. That milk is cooked into caramel that day.

If you stored the milk and then made the caramels, would you be able to tell in the finished product?
Definitely, by about day three for sure. We milk and cook the same day because the result is just better. We have 86 acres and every day the girls are on a new part of land. We have solar fences that are easily moved. So while the girls are getting milked, we move the fences, so when they are turned back out into pasture, it is a new area. It’s beneficial because it helps the land growth but also because it is always clean. They have new food and new space.

Do you have a favorite product?
Yes, our original sea salt and vanilla is my favorite, but I also love the maple cream. Of course I like to pour maple syrup on everything I eat (laughs).

Well you live in the right state, then! What’s next?
The holiday season is coming up, which is the busiest, but then during the winter I get to start thinking about and developing new products.

Louisa, thank you so much for your time and we wish you luck with your caramels – and say hello to the girls for us!
Thank you, Dédé, will do.