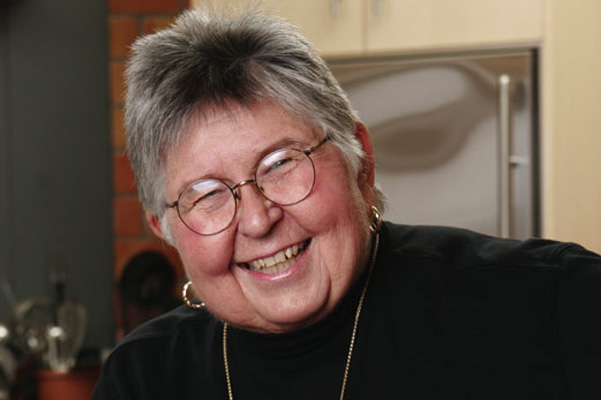 Every year at an annual food convention I would make sure to go to the class, “The Doctor is In.” The panel was made up of Harold McGee (of On Food and Cooking

fame) and Shirley Corriher, a biochemist who has applied her knowledge to the world of food. The attendees would get to ask questions about issues they were encountering in the kitchen and Harold and Shirley would always set us right with solid wisdom and a dose of humor.

Shirley is known for her biscuits, which were thankfully published in her book BakeWise: The Hows and Whys of Successful Baking with Over 200 Magnificent Recipes

. At this same convention, Shirley would make these feather-light biscuits and we would all line up like we were waiting for the most precious thing imaginable. We were hardcore foodies being feted with every food and beverage you can imagine – and it was her biscuits that captured our palates.

Now you can make them just like Shirley’s Nanny. It’s all about texture.

Dédé Wilson: Shirley! It’s been a few years since we have spoken and I am so thrilled to be finally talking with you for Bakepedia. I miss your “Doctor is In” classes! There aren’t many places folks like me can go to ask the hard questions.
Shirley Corriher: Well, thank you for having me, Dédé

How did you become Queen of Biscuits?
It is my grandmother’s recipe. It’s actually not a recipe. The secret of any bread recipe is that a wet recipe will provide steam, and steam is what makes things rise. Most people, when they see this biscuit dough, go, “Ehhhhhhh that’s not right! It’s about twice the amount of liquid of any other recipe, I can’t possibly do anything with this mess,” but Grandma had an oblong wooden bowl and she would have a wet mass in half of the bowl and flour in the other half and she would pinch off some of the wet dough, flour her hands good, and then coat the outside of the wet dough balls. This way you can handle the dough without getting gooped up.

This is a very soft dough and you have to get it into the pan and get them all squished up next to one other. They rise up instead of out and this makes the most incredibly moist, light biscuits. The real secret was the wet dough. Now when I read bread recipes I can just tell whether they will be moist enough to be decent. So often they aren’t wet enough!

Do these have more longevity since they are so moist?
Well, biscuits are best when they are hot from the oven. But [my husband] Arch fills his pockets with them whenever I am doing a demo! I don’t make them at home that often anymore since we are trying to watch our waistlines. What he does is split them and heat them in the toaster oven and they are heavenly.

And you use self-rising flour. Was that in your grandmother’s recipe too?
She used self rising, yes. That was always part if it. It is a very southern way of making biscuits.

You say in your book, BakeWise, that it took you a long time to figure out her technique. How old were you when you finally got it right?
My parents moved around, so I stayed with my grandparents until I was 6 years old. I would play outside making frog houses all the way down the front walk. I would go inside and ask Nanny if I could help and I would try and try to make the biscuits and I couldn’t make them right. I would get so upset and Nanny would lean down and give me a big hug and say to me, “I guess you forgot to add a touch of grace.”

Many years later – I was in my 30s – I was in London at a teaching school and I was kneading a wet yeast dough and all of a sudden I thought, I have seen this somewhere before, and remembered it was her biscuit dough. I had tried everything, adding more shortening, more this, more that and nothing worked. Then it became obvious; instantly I knew the wet dough was the secret.

I fixed the biscuit recipe and it made the huge difference I had been searching for.

Shirley, you advise bakers, both professional and home cooks. What do you think are important things for the home baker to know?

A lot of recipes, especially cakes, are over leavened. What happens is the bubbles get big, run into one another, float to top and pop and then the cake is heavy and you think you should have added more baking soda or powder. The rules are very simple. I use 1 teaspoon baking powder per cup flour in recipe. Now the max you can use without really losing volume is 1¼ teaspoon baking powder per cup. After that, you lose volume.

Where people make their mistake is with baking soda; it is the active part of baking powder. There is only ¼ teaspoon soda in 1 teaspoon baking powder, so recipe rules still apply. Today a lot of recipes have a teaspoon of each, which is enough to leaven 5 cups flour. The soda is the big thing to watch out for. I just avoid using soda altogether if I can.

Sometimes it isn’t used to leaven; it is used to color. Acidic things won’t brown well, so some bakers use an outrageous amount of soda to brown their cookies.

And dry dough. Bakers make their doughs too dry. They add too much flour because they think the dough will be easier to work with – but it makes them dry!

You mean other than biscuits?
Yes! You see this with puff pastry. You might be using a high-protein flour and if you use too much you will make a tough, dry dough. So try this: brush it with water.

With water? I have never heard of this!
Yes. When you are ready to make the folds, brush off any excess flour and brush the dough with water, then fold again, brush with water and fold again. The dough stays soft and easy to roll out to and in the end the water makes steam; the dough rises high.

Shirley, I have my bag of self-rising flour ready to go. I would rather have you make the biscuits for me, but at least I now have your recipe and your tips!
Thank you, Dédé. It’s been very nice speaking with you again.