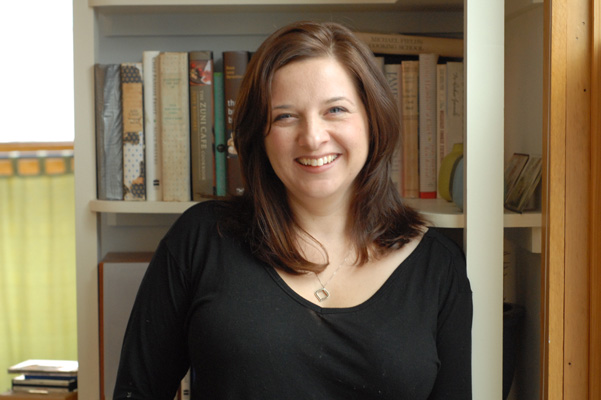 The food world is vast and every now and then you re-connect with someone you’ve lost touch with. Such was the case recently when I spoke with Amy Traverso, the Senior Lifestyle Editor at Yankee Magazine. We have known one another for years and when we phone chatted it was like no time had elapsed. I thought of her because she is an apple expert and this is her time of year! Her book, The Apple Lover’s Cookbook, is quite comprehensive and a must for every apple eater and baker. Read on to learn about her favorite apples and why you might not want to polish yours too soon after purchasing! (This interview took place August 21st).

Dédé Wilson: Amy, I am so happy to be speaking with you!

Well, as a self-proclaimed apple nerd I figured you must be getting excited. This is your time of year! What varieties are you excited about right now?

I’m just excited in general because I am seeing early Macs (McIntosh) at farm stands and it’s fun to see the first of the season come in…it’s early but its happening…my neighbor’s tree is dropping fruit! I just love when September is around the corner….

Has this year’s weather been good for the apple trees? Will we have good crops?

It’s a funny season because it’s been so cool. Last year spring came early and fortunately the temperature stayed warm enough so that most trees bloomed safely without frost…this year feels more typical…we might be a couple of weeks behind but we are close to a typical schedule. (Update: Amy emailed me last minute to say that a local New England grower said that we are two weeks behind).

Of course we are talking about New England weather…

Yes. We will see the apples really streaming in mid to late September, early October and even into early November if it’s not too cold.

Hmm, so the varieties I get most excited about…there is an earlier apple that was first bred in Northern CA and one orchard in MA has it…Pink Pearl! It looks like a bland, brownish, boring apple, kind of the shape of a Golden Delicious, but the flesh is light pink…the color of a pink eraser! It’s bright pink and has an almost raspberry flavor. It is best in warmer climates like CA and does really well there. Here, Nashoba Valley Winery has a couple of trees…they don’t reach their ultimate flavor potential, but they are pretty darn good…a couple of others are Roxbury Russet, which is the oldest growing apple that we have.

Does that go back to Roxbury CT or MA?

Roxbury, MA had the first orchard and you can still go there…there is a hill that is probably where the orchard was and you can go to Bartlett Street, which was owned by a man named Bartlett where that pear first grew…of course it was really a William pear that got renamed…

The Pink Pearl blows peoples minds when they bite into it. Its unique flavor makes an amazing tart with fall raspberries -so good together.

I’m looking forward to Ashmead’s Kernel, which tastes champagne-ish, has a really crisp texture when fresh and russeted skin…and a French apple the I love this the Calville Blanc; it’s the traditional apple for tart Tatin…it almost looks like a quince…kind of knob shaped and it’s so heavy and substantial and holds up to baking…

Tell me about apples you like to bake with.

Me too! Although I hardly ever make a single variety pie (laughs)…

I will bake with Jonagold, the Cavillon Blanc…but if I were limited to the supermarket I would mix some Granny’s and Pink Ladies or Jazz sweet apples that hold up really well…Golden Delicious can be great when fresh, but they lose their flavor so quickly. Ginger Gold is the same way – loses it’s aromatics very quickly…

What about baking an apple…not in pie, but for baked apples? My Mom always used Rome Beauty and they do hold their shape and color but I am not a fan of their texture or flavor.

My favorite for a baking apple would be Pink Lady and Jazz because they both have a rose color to the skin and the color holds when you bake them. They stay really pink and the flesh holds well…I love heirlooms but some of the new varieties are being bred so thoughtfully. They have great qualities – high acidity but a lot of sweetness too, juicy firm, flesh…there is a lot of good stuff out there and it has taken a lot of work to develop them. I am not anti-hybrid!

Do you have any tips for long term storage?

A lot of apple growers will put apples in commercial storage where they have gases pumped into storage rooms and we don’t have that. The apples go into suspended animation! Some smaller farmers use something called Smart Fresh. It inhibits ethylene production so that they don’t ripen further. They maintain juice and crunch but they will lose aromatics when in deep storage…smaller farmers I have spoken to who don’t use that say they use root cellars and brown paper bags. At home I use a brown paper bag and place the bag in the crisper drawer. Or you could use a plastic bag and pop holes in it. You want air exchange but a bit more moisture than what is just in the drawer itself.

I always have this issue when I find my Northern Spy and then want to hold them until Thanksgiving for pie!

Every apple has different qualities and some hold up well and some don’t. I have had good luck with the Calville Blanc…sometimes you will get a Honeycrisp sprayed with wax and that will help…and some apples produce natural waxes that help their longevity…

Tell me more about that!

You know how sometimes you see an apple and it looks cloudy, especially when it’s still on the tree…

Exactly, a McIntosh is a great example. It can be pesticides, but oftentimes it is the natural wax that the fruit produces to preserve itself. When we polish an apple to eat it, we are rubbing all of that away!

So don’t polish your apples until right before you eat them?

Is there a date after which you won’t buy apples?

Probably March, but everyone has to make up their own mind…you have to decide about whether you want to eat fruit shipped from South America. While I was working on the book I bought apples from wherever I could for recipe development…but I want to eat apples that are local…I switch to citrus by March…then local berries…and pomegranates! I will stop to take a break. By the time September time comes around I am hungry for apples again.

(Ed Note: At this point in the interview we spun off into a discussion of apples of New England in particular)

Dédé, you would love talking to John Bunker…he calls himself the fruit detective…he’s with Fedco Seeds…His goal is to identify the heirloom apples of Maine…he is like a bounty hunter! You will see posters that he puts up that say things like, “ we hear there is a rumor of an apple being spotted nearby…” People call him to tell him of a lone tree on their Grandmother’s farm and things like that and he might be able to help name it…you know every apple seed is unique as it is a blend of the genes of the tree it came from and the pollen brought by the pollinators. Each is a unique combination! Seeds might be easy to grow but that doesn’t mean every one would be tasty!

Well, we are all looking forward to a very tasty apple season, Amy! Thank you so much for your time. We will be featuring both your Apple-Studded Brown-Butter Streusel Coffee Cake and the Apple-Stuffed Biscuit Buns from your book, The Apple Lover’s Cookbook