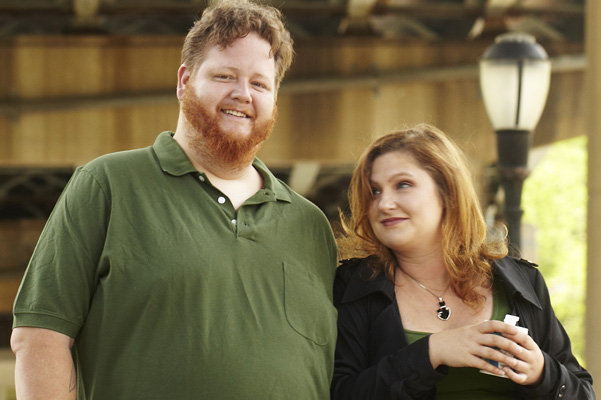 When a copy of Robicelli’s: A Love Story ,With Cupcakes: With 50 Decidedly Grown-Up Recipes, written by husband and wife Matt and Allison Robicelli, showed up on our desk, it was immediately clear that this was a love story about their feelings for one another as well as for their chosen art form – the cupcake. No pink cupcakes with sprinkles to be found here. Located in Brooklyn, NY, many of the cupcakes are named for iconic New York locations or favorite stars, such as the Kiwanis, a vanilla cake layered with vanilla custard, chopped bananas and roasted walnuts, topped with mocha buttercream, drizzled with chocolate and crowned with strawberries. Then there’s the Dom Deluise, a pistachio cake with cannoli buttercream and chocolate chips finished off with orange zest.

Along with these luscious combinations, be prepared for the F-bomb and the S-word to be sprinkled amongst the recipes along with some bawdy humor. Let’s say we rate this book a PG-13 or an R, depending on how permissive you are; a refreshing addition to our cookbook collection is what we call it. We sat down with Allison to talk about love, passion, cupcakes and chicken and waffles. 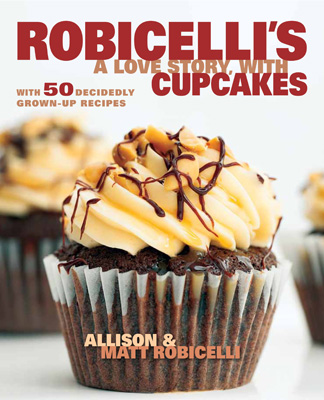 Bakepedia: Allison, after reading your press material I have really been looking forward to chatting with you. You and your husband sound like a blast.
Allison Robicelli: Well, we are passionate, but not rich! How’s that for an opener?

When people ask what you do, how do you answer?
You know, this is funny. I don’t know! That’s the God’s honest truth. I’m not exactly sure. Well, I guess I am not unemployed (laughs). If I am at a wedding or some social event I will say I am a mom. That’s one thing I know I am because the kids are tangible. There are two new guys living in my house that weren’t there before (laughs). Okay, I’m a pastry chef and trained savory chef, but I also do R&D, marketing, I’m a networker, do social media, I’m an entrepreneur. I am a captain of industry! You don’t wear one hat. One moment you are featured in the Wall Street Journal and the next moment you have to learn how to fix the plumbing.

What is your favorite part of what you do?
I am a really creative person and I get to constantly follow my ideas. That’s the nice part of being self-employed and being a chef. I get ideas and can chase them. I don’t have to prepare a PowerPoint presentation to take to a panel to discuss my next steps. I get instant results. I love the tinkering, the experimentation. Sometimes things fail, sometimes they don’t, but I am constantly moving forward. There isn’t a lot of repetition. It’s constant discovery.

But at a bakery, don’t you have to repeat yourself? If your customers come to like and expect a certain flavor, don’t you have to make it all the time?
We have a different approach. For instance, we have never made a red velvet cupcake or a chocolate-chocolate cupcake. My husband and I are both chefs. We met at a bar and that first night we were brainstorming ideas and strategizing. There is a playfulness within my marriage as well as at the bakery. We get ideas. We are flirty with each other and with our business approach. We have new flavors every week. We have a different business model. We were introducing a new flavor one to two times a week. We have 350 flavors! And yes, people say, “When is this one coming back?” Like the Brooklyn Blackout and the Pecan Potato Chip we have to feature at least once a month. Right now I am into everything having to do with pumpkin, apples and pears – that set of flavors.

Okay, name your favorite!
My favorite is a cupcake with butternut squash, vanilla buttercream and roasted butternut squash seed oil drizzled on top. The oil gives it a subtle, smoky flavor that is balanced with the sweetness of the squash. But it depends on the day. I also love the Pecan Potato Chip. I don’t actually eat a lot of them. People will eat our cupcakes with reckless abandon, but as a chef I am always judging, how could I improve it? That said, the Pecan Potato Chip is that perfect salty, sweet and fatty combination that was my pregnant ass’s dream and I still love it.

How are you inspired to create recipes?
Well, for instance, I discovered that squash seed oil in a specialty food store where they were doing a tasting and I just thought it was the most delicious thing ever. I said to Matt, “We have to do something with this.” It took a few months to design a cupcake around it, but now it is my favorite. We are both trained chefs. We have an old-school approach. We give flavor balancing a lot of thought. For instance, we knew right away we wouldn’t be using a confectioners’ sugar based frosting. We use a French egg yolk buttercream. It isn’t as stable, but the flavor and texture is so much better. We don’t use food coloring; never have, but we do think outside the box, like with our chicken and waffles cupcake, using bacon or making a blue cheese buttercream. It should always be delicious and memorable.

Do you have a moment, event or recipe from your career of which you are most proud?
I remember early in 2009 when we made the chicken and waffles cupcake, initially we were coming up with foods that represented the cultures we grew up with in Brooklyn. Crown Heights had this chicken and waffles place, I don’t even remember the name. We ate there and I remember thinking it was crazy, but if you can have waffles, sausage and syrup, why not chicken? So we were thinking right away about how to turn this into a cupcake and then we said, “Let’s do this.” It might not even end up being good, but we can do it anyway because we are the bosses! At first I thought no one would buy it. But they did. Oh yeah. We do R&D in our heads, then we talk it out – this one worked pretty well right away. The cake is like the waffle part. We began by modifying our yellow cake recipe. We wanted it a little springier inside, just like a waffle is. Then we took chicken and soaked it in buttermilk, battered and fried it and the moment it comes out of the fryer we toss it in maple syrup. That nugget is on top of the cupcake. We use plain vanilla buttercream. We considered maple and decided it would be too much, but right before serving we drizzle a little extra maple syrup on top. The syrup flows down the ridges in the buttercream swirl and flows into the cake.

What are the three most important things that you think the home baker should know?
1. Recipes are guidelines and are not set in stone. I know this goes against every rule bakers are usually told. “It is an exact science. Everything needs to be perfect.” That’s true, but let’s say it’s really humid out and the flour is going to act differently than it does on a dry day, altitude makes a difference, one batch of strawberries might need more sugar, etc. So as much as you should follow the recipe, if it seems off – and it could be 1,000 different things – it probably is. The cake is done when the cake is done!

2. Failure is okay. We have lots of experience but we learned by doing and you can, too. So what if it doesn’t look like the picture? It probably still tastes great. Think about what you did and what you might try differently next time. Maybe you used a darker pan and it baked faster. Maybe your oven is off. Make notes.

3. You need to be involved with the food. Be aware. Stay in touch with what you are doing. Taste the components as you go and make adjustments. Use your instincts. Use your palate! This isn’t magic. It’s trial and error and learning from mistakes.

Tell us about what you are doing currently.
I’m still in the phase of not understanding that the book is real even though it’s sitting in the apartment. This has been two years of my life. It’s nerve-wracking. You put it all out there and our book is part recipes and part memoir. It’s very personal. It’s about how I met my husband, how we started our first business and lost everything and accumulated huge debt. We had practically no income and two kids all while we had what was rated as the best cupcake in the world, but we had what was important to us – our family. As far as business is concerned, it might sound cliché, but it’s not a sprint. It really is a marathon – and we are in it.

I want to point out a few things about the book. What’s unique is that we make everything from scratch. Every cupcake has at least three components – cake, buttercream and a topping that adds texture, but not just sprinkles. We don’t even own sprinkles! Maybe it’s homemade chocolate malted milk balls or putting pudding inside the cake or making cookies from scratch, then smashing them and using them as toppings. What we are we doing is mixing and matching, it gives leeway to experimentation. We also show you shortcuts if you aren’t as crazy as we are. You can use some purchased jam; we won’t judge. We offer tips like if you have extra French buttercream, put it in extra ice cube trays and freeze, then use as a sweet buttery topping for pancakes. I want people to mess around, I want people to say, “Look what I did!”

What do you hope to do next?
Write more books, so buy as many copies as possible (laughs). Our retail shop is coming, most likely in Bay Ridge. I have driven myself crazy before with work and projects and I won’t do that again. I want to be there as a wife and mother and a friend. I don’t want to be the wife that isn’t there. I like to say I make plans and God laughs, but I don’t worry about it. We will be doing more community and nonprofit work. We like to make people happy and smile any way we can. Going forward that’s what we will be doing.

Allison, good luck with the book and the new store. It’s been a pleasure. Your passion for life really comes through.
Thank you, Dédé. We will let you know about the store when we open. Thank you for sharing the book!