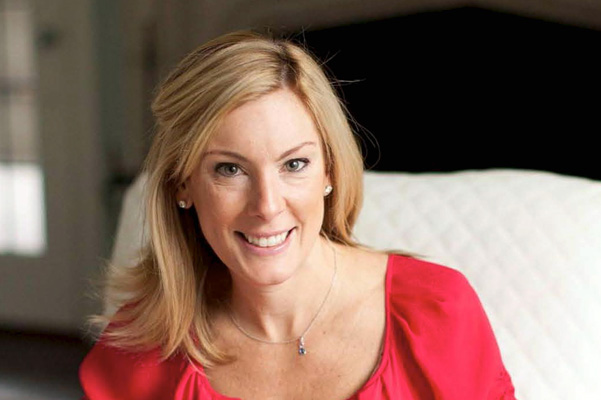 Allison Lubert is a trained nutritionist, who, after experiencing food sensitivities and being diagnosed with food allergies set out to create desserts and baked goods that she could enjoy. Her adventures in the kitchen were so successful that she opened her Sweet Freedom Bakery in Philadelphia (with two additional locations in the suburbs) where the focus is on desserts that are gluten-free as well as vegan, dairy-free, egg-free, soy-free, corn-free, peanut-free and free of refined sugar. That led her to write Baking You Happy, her first book, which contains over 50 recipes such as Samoa Cupcakes, Mexican Hot Chocolate Cupcakes, Cinnamon Rolls, Pumpkin Doughnuts, a Birthday Cake and the recipes we are featuring: Eggnog Cupcakes and her Carrot Loaf. I chatted with Allison about developing recipes within such strict guidelines, and also asked for special tips for all of you who might make her recipes.

Dédé Wilson: Allison, thank you for taking the time to speak with me. I have really enjoyed the book and the fact that you have developed recipes within these guidelines is amazing. That, I am sure, was a huge challenge. Tell us how you came to bake for alternative diets.

Allison Lubert: I have a background in nutrition and I have food intolerances…I was diagnosed with a wheat allergy when I was younger. It has gotten better but this just goes to show you the complexity of our relationship with these foods…I had a desire to make things for myself and friends and family; that’s where it started…where the experimenting started. I wouldn’t have even called it baking at that point. It was more like taking a little of this and a little of that and seeing what would come out. It wasn’t exact because I was really starting from scratch. Wet to dry ratios were unlike what traditional recipes would suggest, for instance. And then I would try something one day – and it would work – and then the next day it wouldn’t. I would be left scratching my head trying to figure it out. But I kept going and once I got the vanilla cupcake recipe down, and it stood up to several trials, I felt like I could expand…do a chocolate variation and a chocolate chip variation. That was the process and eventually I built up several recipes.

You mention in the book that your basic frosting was the most difficult to get right. Why do you think that was the case?

It took more trial and error than other recipes because I wanted it to be free of dairy and gluten-free, but we have good substitutes for those things. The extra challenge is that I also wanted it to be soy-free and sugar-free and that was tricky. Think about a lot of the alternative frostings out there. They rely on soy and use granulated sugar or confectioners’ sugar. I was taking everything away and left with nothing. This was really starting from scratch! And I think frosting is such an important part of the recipes…I had to get it right. When someone tries a cupcake, they are critiquing the frosting…

You not only came up with a frosting that hit all your criteria, but it is user friendly! It can be made in larger batches and frozen or kept in the refrigerator for quite a while.

Yes it is labor intensive, but it does keep, so I encourage people to make larger batches and freeze it…then all the labor is up front and you have it to use when you need it. I have 4 containers in my fridge that have been there for several months and it holds up!

With alternative recipes such as these so you find that they are calorically more dense?

I think they are equivalent or slightly less…I’m not a huge calorie counter myself…my philosophy is that the more you use unrefined, unprocessed foods, the calorie counts aren’t as significant. Your body knows how to process whole foods…your insulin level isn’t being spiked…I look at the bigger picture…I think that all calories are not created equal…If you ate 1200 calories a day from soda for a month and the following month the 1200 calories were from fruits and vegetables, things would not be the same. You wouldn’t feel the same, your body wouldn’t be the same…

I totally agree with your thinking…

When I was coming up with recipes I was being thoughtful…if I was putting a fat in a recipe, I used a fat like coconut oil or an unrefined oil where it is a medium chain fatty acid so the body uses it for energy and doesn’t store it as fat…it’s really the quality of ingredients that’s important. Much more so than calorie count. The number of calories doesn’t really tell the whole story.

We are featuring both the Eggnog Cupcakes and the Carrot Loaf. Have any tips for our community?

For the Carrot Loaf, make sure the loaf pan is well oiled. I use Bob’s Red Mill All-Purpose Gluten-Free Baking Flour,

which contains garbanzo beans, and blends like that are often extra sticky. I use a bit of melted coconut oil on a piece of paper towel. Also, you can make this loaf into muffins – which bake much faster, if the 45-minute baking time for the loaf seems daunting.

Yeah, when you just want them now…

Exactly. Now the Carrot Loaf, or muffins or however you make it, can be served as is or topped with a Vanilla Glaze or our Vanilla Frosting. If you want something not-too-sweet for breakfast, it’s fine plain. If I want more of a dessert I will add the glaze or frosting. Some folks have been known to glaze it then top with frosting! I say one or the other…it is really just personal preference.

Could you talk a little bit about coconut milk from the can versus from the carton? You call for each at different times in your recipes…

Yes, this is a significant point. The frosting, for instance, won’t turn out if you use coconut milk from the carton. It must be the full-fat canned variety. You know an interesting thing happened to us at the bakery…we were baking as usual and started to notice that frostings were too soft; they weren’t thick and fluffy and they were melting easily if left in a warm room or near a heat source. We considered adding a thickener…we thought maybe it was because it was so humid outside. It was very frustrating. Then we called our purveyor to ask them if they were having any issues with their coconut milk and they said yes! They said that their original source had been coconuts from the Philippines and there was trouble with the sourcing. They had switched over to coconuts from Sri Lanka! It was the same brand, same full-fat, same label and yet, something had changed. We ended up calling around to see if we could find coconut milk made from Philippine coconuts!

What about guar gum…does your coconut milk contain it?

No, ours doesn’t have the guar gum. We use Thai Kitchen brand

for canned. It is very pure. For the coconut milk from the carton we like SoDelicious, their unsweetened version.

For the Eggnog Cupcakes, we get the rompopo extract from a specialty source (rompopo is a spiced, eggnog-like liqueur). It can be hard to come by for home bakers, and leaving it out will not make or break this recipe; it still holds up. All the spices and the maple syrup work great together, although the extract does add an additional level of flavor that makes you say, “Hmm, what is that?” But it will be fine without it…I have also seen homemade versions of the extract on the Internet.

Thank you Allison! I think this extract sounds intriguing enough to order for the recipe. Good luck with the book and thank you for working so hard to perfect that frosting recipe for all of us!