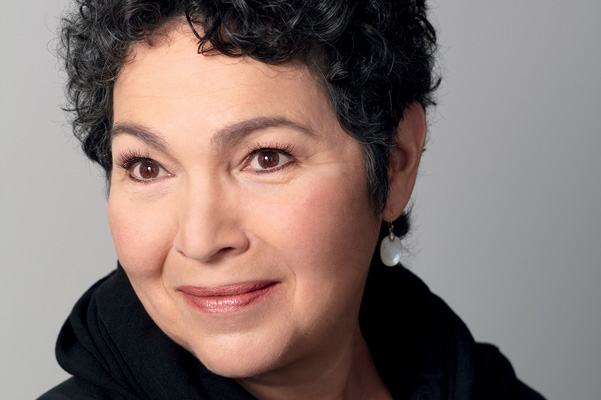 Alice Medrich first came on our radar in the early 1980s in the inaugural issue of Chocolatier magazine. There was a cake with a chocolate band and chocolate ruffles, and it opened our eyes to the elegance and possibilities of baking with chocolate. We now count Alice as a friend and mentor.

Bakepedia: Alice, welcome. We have really been looking forward to this chat!
Alice Medrich: Me too, Dédé. You know you sent me the questions ahead of time and I thought, I better get on my game! I like to think during long walks, so I took a walk because that first question is a big one!

I came up with that one because people ask me all the time and my answer is several minutes long! I can’t wait to hear what you are going to say, so let’s get to it. When people ask,  “what do you do”, how do you answer?
I say I write cookbooks, but then, of course, there is product development, recipe development – I owned a famous dessert shop, but writing cookbooks has been a main focus and people don’t understand what that means, from the concept to the photos and everything in between. It is complex, and yet I don’t think of myself as a pastry chef. I have a hard time with the chef word; such is the burden of the self-taught. I have depth of knowledge in some areas, but not all. I think it is an old-fashioned way of thinking that only a chef is trained.

What is your favorite part of what you do?
The experimentation; generating ideas, discovering and using new ingredients or using an old ingredient in a new way. I love to add new information to the existing body of received wisdom, to challenge what we have always thought about an ingredient or technique.

[At this point in the conversation we chatted about her 1994 book, Chocolate and the Art of Low-Fat Desserts, which was groundbreaking when it came out and went on to win numerous awards, including two James Beard Foundation awards (one of which was Best Book of the Year) and in 2010 was named one of the Best Books of the Last Fifteen Years by Epicurious.com. No one had developed and presented such an array of elegant desserts that happened to be low in fat, but they weren’t made to be low-fat for the sake of saving calories; rather, Alice researched and developed ways to reduce fat while keeping the inherent lusciousness intact or sometimes even improving upon an original idea. Flavor was always at the forefront.)

Do you think Chocolate and the Art of Low-Fat Desserts was ahead of its time?
Maybe it was. It did do well.

It should be re-issued! I bet it would have another life now. The techniques became timeless. When you develop desserts now, do you make many of them low-fat?
What I learned in that book informs what I do now – the fact that reducing dairy or butter in a chocolate dessert allows the chocolate flavor to really bloom, that feeling of mastery when you learn how to handle ingredients in a new way. I use techniques I developed for that book all the time, not because they make a recipe low-fat, but because they can improve flavor.

How are you inspired to create recipes?
It can happen in any way. I can be inspired by an ingredient, or a flavor, or a comment or even a prompt, like when you get an assignment to develop something you might not have otherwise. It is very random.

Do you have a moment, event or recipe from your career of which you are most proud?
Winning my first Cookbook of the Year award from IACP [International Association of Culinary Professionals] and the Julia Child Award, and being on Julia’s show, “Baking with Julia,” are all certainly high points, but what it really comes down to are private moments, like on Saturday afternoons after [the bakery I owned] had closed and everyone had gone home and everything was clean and I’d look around and think, “Look what you did. You created this!” I can feel it now, truly envision it, Oh My! It didn’t matter how over my head I was or the huge to-do-list that existed – it was that moment of quiet pride and accomplishment. The day-to-day production is hard, but I love the perfection of doing something again and again, perfecting a method, putting something to a standard. I even liked designing little pieces of equipment. I enjoy the engineering part, too. The generation coming up is fearless, we didn’t know any better, we just jumped right in!

What are the three most important things that you think the home baker should know?
1. It’s a really good idea to follow a recipe to the letter at least the first time – assuming you are working with a trusted author. If you don’t, you wont get what they have to offer. Make it your own the next time, but give them the benefit of the doubt. The recipe was written the way it is for a reason.

2. Scales! We should all be using scales. It is a cleaner, neater, easier, more Zen-like way to measure. Now we just have to get all the writers and publishers to agree on this point, too!

3. Chocolate percentage really does matter. If a recipe doesn’t say, then you can be safe with 55% most of the time. Older books that don’t qualify almost always will work with something less than 60%. By the time you get to 62%, things can go wonky. If that happens, you can try the same recipe again with 10% less chocolate.

And I have a fourth idea that’s aimed more at writers and recipe developers but it affects home bakers – I wish we would all be more transparent about which flour we are using, particularly bleached vs. unbleached. They will both often work, but not in the same way. This is an area of cognitive dissonance.

Tell us about what you are doing currently.
I am working on a book on baking and desserts using flavorful flours other than wheat. It is really a new way to bake. It was not intended as a gluten-free book, but obviously it has that included. By the way, I have used xanthan gum very minimally.  The book also does not focus on a blend of flours [like most gluten-free mixes], but I am highlighting flour as a carrier of flavor, not just as a binder. Also, I just updated my book, Bittersweet.

Oh how exciting! When that book came out, there had been nothing like it. You were the first to address chocolate percentages and how they react within a recipe.
We have renamed it Seriously Bittersweet and it is vastly simplified. It is part-memoir, there are lots of recipes and I offer options for different chocolate percentages throughout. In the back of the book, there is a huge nerd section with formulas and graphs, all kinds of information that will help you bake and create with chocolate.

[We are highlighting Alice’s Warm Mocha Tart from the book.] 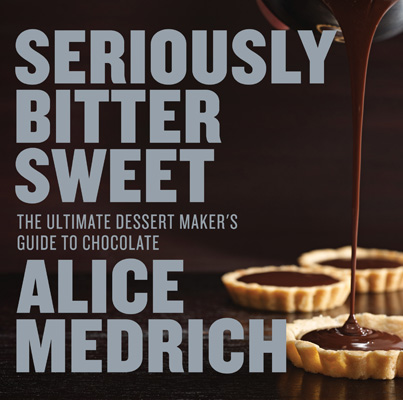 Do you also address cocoa butter percentages? Many times two different 70% chocolates will act differently in a recipe and very often it seems to us it is because of the cocoa butter percentage, among other things.
I do address cacao butter percentages, but what I think the home baker needs to know is that two different 70% chocolates, regardless of their cocoa butter content, are going to act more similarly than a 60% and a 70%. So if a recipe calls for 70% and you use a 70%, it will most likely work, whereas if you sub in a 60% it probably won’t. This also depends on the recipe. Some are more tolerant, like a Queen of Sheba Cake with its ground nuts and low flour content.

What do you think are the pickiest recipes?
Ganache!

This was my thought, too. At its most basic you have two ingredients, chocolate and cream, and if the balance isn’t right, it isn’t going to work! What is your favorite way to fix a broken ganache?
It depends on the issue, but many times thinning with a bit more liquid does the trick. Try placing some extra liquid in a bowl and slowly whisking in the broken ganache until it is smooth and the mixture comes together. I used to be resistant to the idea of using a stick blender, but they really work very well!

What do you hope to do next?
Oh, I don’t know!  Who knows? I love product development, but I trust that the universe will guide me; the right thing will crop up at the right time.

Alice, thank you so much for your time.
My pleasure, Dédé.