I have been enamored of Alice Medrich’s work for years ever since she enticed me with her approach to chocolate in her debut book Cocolat, which should be on your shelf, by the way. Alice has a way with ingredients where she coaxes their very best qualities to the fore and she has now turned her sites on flour. But not our standard wheat flour. In her new book Flavor Flours she explores buckwheat and sorghum, rice flour and coconut flour, teff, cornmeal and other whole and ancient grains. While the flours are gluten-free, that was not her main goal. Rather, Alice wanted to explore what flavor and textural qualities these flours offer. We chatted with Alice and are featuring her Sorghum Layer Cake with Walnut Praline Buttercream and Buckwheat Linzer Cookies. 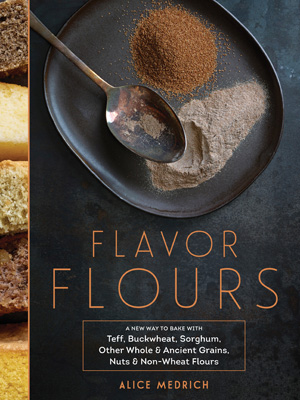 Dédé Wilson: Alice, so good to speak to you as always; thank you for taking the time. I am sure you are busy with the new book.

Alice Medrich: Hi, Dédé. Yes, I have been busy traveling. I was in Texas – Houston, Dallas, and Austin then home briefly, then off to Portland, Seattle, and Richmond Virginia and then off to Minnesota!

That is a packed schedule! And of course this is all for the new book, Flavor Flours. So while you are teaching and doing book signings what are people saying about this concept of alternative flours?

Well, I always ask people why they are there and during this tour there is a fabulous mix. While there are recipes in the book appropriate for those “going gluten-free” as they often say, or who are celiac, I am also getting people who are interested in whole grains, new uses of ingredients – or they are there because it is me and they want to know what I have been up to!

That’s fabulous because it never was the goal of your book to just attract the GF crowd. How gratifying that people are getting the concept.

Exactly…they are getting it…and then there is a certain amount of surprise at how delicious the flavors are.

Let’s talk about flavor – the title of course is Flavor Flours. I think it is so interesting the way you present recipes for sponge cake at the beginning of each chapter (the chapters are broken down by type of flour). It is fascinating the way you have explored how each flour can be used within the context of that classic recipe.

This was my way in…I wrote this book with a co-author (Maya Klein) and we got into the exploration differently…for me it was a way for me to taste the flours…I was hoping the sponge cake format, with its structure from the eggs, would allow me to experiment with all of these flours without the use of xanthan gum or from taking any extraordinary measures to get the recipe to perform – and it worked out!

Did the title come in the beginning?

Surprisingly I was not that far into it. I had a title I liked, the editor had one they liked (that I didn’t love) but we figured we would figure this out at the end. You know after everything is done it often becomes clear. But then there was a moment during a phone call where she asked me why I was picking these flours and I said because these flours have flavor – they are flavor flours! I didn’t know I was speaking a title at the time but she was brilliant enough to realize it.

Did any flour in particular give you the most trouble?

Coconut flour! (She laughs loudly). We didn’t use it very much…it can be problematic…they way we did use it was to deprive it of liquid or then control its liquid. I do believe it is mostly out there being used as a functional ingredient for its absorbent properties and fiber.

The first time I played with it – I think I was making pancakes – I couldn’t believe how much liquid it needed. I kept adding, and adding and adding to the point where I think I had added 4 times the amount I initially thought it needed – and it still wasn’t right!

It’s not something you can put a whole bunch of in anything…you can’t replace all of your (wheat) flour with it but is something that brings a coconut flavor that we both love without all of the fat so we tended to use it with shredded dried coconut for flavor and crunch, for instance. The Crunchy Coconut Cookies are fabulous and there is a truly inspired tart crust. I taught the crust in Texas and students are using it for everything – for chocolate fillings, citrus, you name it…I thought the coconut flour would work in a meringue, but no, no and no!

On the other end of the spectrum, did any of the flours just work seamlessly?

Hmm, I don’t know how to answer that…I guess not really. Part of the reason I am answering like this is because we approached one flour at a time and really pushed it to the point where we really understood it, and then we would approach the next flour and we would have the benefit of what we had just learned – because many of the techniques used and inherent properties would be similar…not exact but enough so that the subsequent flours benefitted from what we had already learned.

Yes, to a degree.

I loved the story about how you and Maya had very different experiences with buckwheat…you showed how it wasn’t just the ingredient itself but how it was used and treated that could make a difference. (The story was that both Maya and Alice were working on buckwheat recipes and while Alice was getting light, airy results, Maya was experiencing heaviness bordering on gumminess. Comparing notes, they realized it was technique – stirring/beating versus folding and a light hand. Buckwheat flour, it turns out, must be treated delicately).

There are flours that, depending on the way they are mixed, can make or break the recipes. The buckwheat story is thrilling and fascinating because not one of us would have solved it alone. It is my favorite story because of the diversity of approach and the collaboration

Read the buckwheat recipes carefully. If it says fold, fold! Don’t stir. If I could go back there are a few recipes where I would emphasize this even more. You know how you often see a direction state, “fold just until blended”? I would go back and add, “I really mean it”!

The qualities of the flours really did inform how the recipes were written…a really big range of tastes and textures can come from one ingredient. Many people think they do not like buckwheat because they have only had kasha – which is very strong and assertive. They think, “oh, that’s buckwheat”. But it is so much more.

This is a perfect segue. We are highlighting the Buckwheat Linzer Cookies. Anything to add for our bakers who want to make this recipe?

If you do it in the food processor, just don’t keep mixing it too much. The cream cheese will break down. You can also make this easily by hand.

And that way you can see and feel the dough better?

Well yes, but also because it is just easy and you then you have no chance of over-processing.

We are also showcasing the Sorghum Layer Cake with Walnut Praline Buttercream. Any words for this recipe?

What great two choices! This cake is more of the French school of thought with layers of cake and real buttercream. It is a very good example of sorghum because this flour often has a tiny bit of grain to it and when you combine it with that buttercream and the nutty crunch of the praline, the cake texture just works.

How about shopping for these flours…any tips?

Treat them like whole wheat. Maybe with the exception of white rice flour I would buy just what I need and store in the fridge or freezer. And buy from sources with regular turnover so that you know they are fresh.

One thing that works really well so that you don’t have to buy 9 new flours at once is just commit to one at a time. Buy one flour and work through that chapter; then move on to another. Maybe buy some white rice flour, too since it is used in conjunction a lot.

Was it obvious to organize the book by flour? Makes so much sense…

It wasn’t at first but our editor coaxed us gently into the realization (she laughs). Once we got it, we got it big. Why bury the message!

And there is a resource section of course…

Yes and you can find many of the flours in better supermarkets or online. Look for Bob’s Red Mill – they have many of these flours, and brands such as Authentic Foods. I did a lot of research with chestnut flour and found one I like the best from Allen Creek Farm, since it isn’t as smoky as so many others.

Alice, thank you much for your time – and this book is so exciting. The book reminds me a bit of Peter Reinhart’s new book, Bread Revolution, in the sense that both of you are breaking new ground with uses of ingredients.

Thank you, Dédé. You can always count on Peter to push the envelope. What we didn’t do here was treat these flours as blends. We did want to highlight them as the amazing ingredients that they are and for their own unique qualities. What excites me is what they bring to the table. Gluten-free flours should not just be appreciated for the fact that they are gluten-free!

Exactly. It isn’t about what you can’t have but what you can have – and truly enjoy! The fact that these are quality ingredients and not just substitutions.

Yes, yes and yes! This is not about deprivation.

I think when people see the image of the sorghum cake that will become clear immediately!