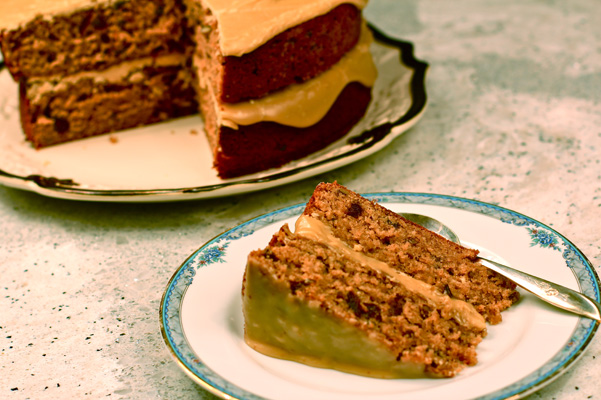 I had been baking for years before I heard of a blackberry jam cake. As a New Englander, maybe that wasn’t surprising. If I had been a southerner, I probably would have had my Grandma’s recipe. Regional specialties abound and this is one of them. I started doing research and some referred to them as hailing from Kentucky, while others named Alabama. What they had in common was blackberry jam incorporated into a fairly spice-laden batter. Cloves and allspice seemed to be omnipresent, and in big doses. Buttermilk was a common dairy component along with butter. Some had raisins, golden or dark, while others incorporated chopped dates. Nuts, usually pecans, lent crunch. Some were Bundt style, while others were layer cakes and most sported a caramel icing, frosting or glaze. I had some Crofters Blackberry

premium spread and decided to put it to good use with this old-fashioned layer cake. When I bake with jam I often like to use no sugar or low-sugar jam, such as this. More fruit means more flavor, not just sweetness!