Chocolate, Cherries and Almonds in a Quick Bread 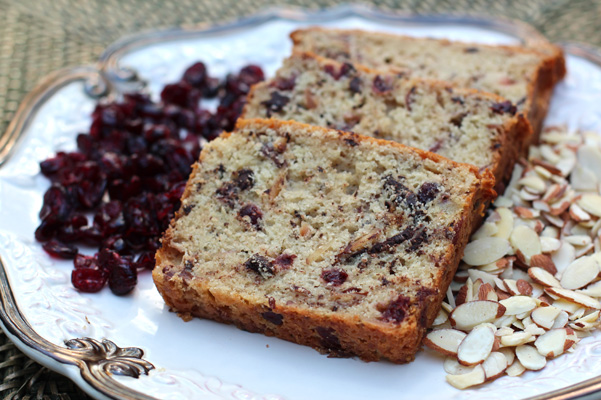 We made this bread in the Test Kitchen with sliced, rather than slivered almonds. While we always tell you to make a recipe as written the first time, we were so enamored of the flavors that we had to make this bread – and all of our local stores were out of slivered! Our apologies to author Adrienne Kane. That said, the recipe from her new book United States of Bread

came out beautifully and tasted as delicious as it promised. Soaking the cherries to plump them and toasting the almonds to enhance flavor are good additional techniques; second time around we soaked cranberries in cranberry juice! We used 60% bittersweet chocolate chunks to great effect. Also check out her Peanut Butter-Bacon Bread for a saltier, more savory take on a quick bread.

Reprinted with permission from United States of Bread

© 2014 by Adrienne Kane, Running Press, a member of the Perseus Books Group.

AN AMERICAN FRUIT BREAD, “BISHOP’S BREAD” IS THOUGHT TO HAVE BEEN COINED IN THE NINETEENTH century when clergymen would visit settlers and were often fed a little something sweet to eat with a cup of coffee or tea. It has dried or candied fruit in it, making this bread often seem like a fruitcake. But it can also be studded with nuts, swirled with chocolate, and spiced with cinnamon. Because of its “fruitcake” nature, nowadays it is often thought of as a holiday treat, but I find that the ease of mixing up this quickbread makes it a wonderful treat to have year-round.
In this recipe I use it all—in moderation. A bit of bittersweet chocolate, some toasted slivered almonds, and a serving of dried cherries or cranberries make this bread a restrained treat. I favor baking with dried rather than candied fruit—I want the pure flavor of the berry. And by reconstituting the fruit, the berries plump up, making this simple bread sumptuous.]