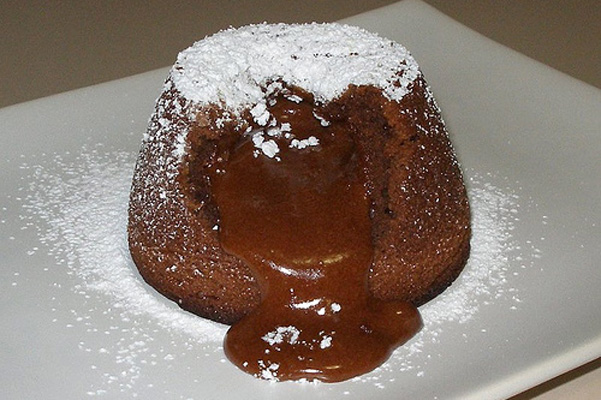 Also Lava Cake. A single-serving cake featuring an outer shell of warm, tender, dark-chocolate cake surrounding a melted, semi-liquid chocolate center. They are often unmolded, which makes cutting into the molten center more dramatic, but they are also sometimes served in the ramekins in which they are baked.

The recipe appeared in Jean-George Vongerichten’s 1998 book Cooking At Home with a Four-Star Chef (Broadway Books) and, indeed, he claims to have invented the recipe and his version helped popularize the dessert. (This origin seems unlikely, however, as a similar dessert called “chocolate fondant” had been made for years in Europe). The version with “molten” in the title was very popular in the 1980s in upscale restaurants, eventually spreading throughout the U.S. in many different versions as well as presented in other cookbooks. The dessert can now even be found in chain restaurants and in the freezer section of some supermarkets. Some versions are flourless and more soufflé-like; some are eggless. Others use a cake batter that naturally produces the molten center with a bit of under-baking, and some recipes add a ganache center to ensure the textural contrast. They can even be made in the microwave, as with our Microwave Molten Chocolate Cake.

Vongerichten’s original recipe contained butter, high cacao and high cocoa-butter content dark chocolate, eggs, extra yolks and a bit of sugar. The only flour used was to coat the ramekins.