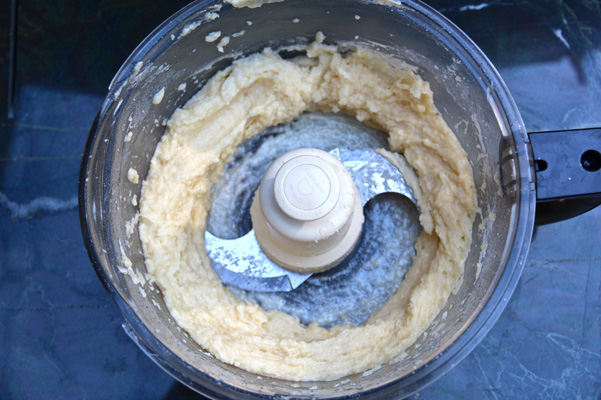 Also frangipani. A blend of almonds (usually blanched), sugar, butter and egg, all of which are sometimes further enhanced with almond extract, flour or other ingredients. It resembles thick almond custard.

Frangipane is named after 16th century Italian nobleman Marquis Muzio Frangipani, who invented a bitter almond-scented fragrance that was used to perfume gloveswhile he was living in Paris. French pastry chefs were inspired and invented the recipe, which became a classic.1 Some sources claim that the actual perfume he invented was added to the culinary mixture, further enhancing the aromas and flavors.2

Some recipes begin with finely ground almonds and in this case, the texture of the nuts often remains identifiable. Other times, the recipe uses smooth almond paste for a smooth result.

Frangipane can be used in a variety of ways. It is the classic filling for the French Pithivier and can be found in croissants or as a base for tarts (see it used in our Pear Frangipane Tart. It is very easy to make frangipane from scratch.