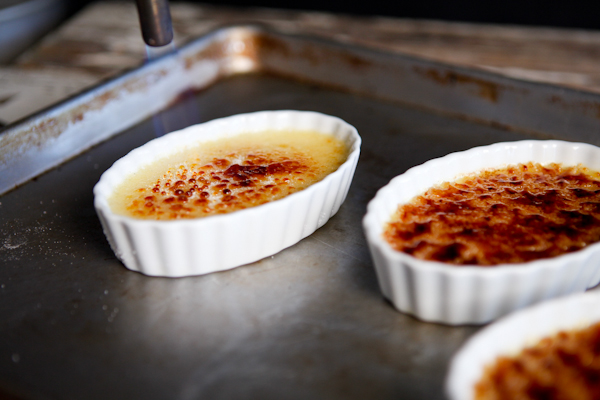 Literally “burnt cream.” A baked custard typically made of heavy cream, egg yolks, sugar and vanilla poured into small ramekins, prepared in a water bath, and topped with the iconic solid sheet of crunchy, caramelized sugar. The caramelized sugar topping can be made under a broiler, with a propane or butane torch or with a cast-iron tool, which is essentially a branding iron and sometimes referred to as a salamander. Some chefs use white granulated sugar to create the caramelized sugar, while others prefer turbinado or brown sugar.

The history of the dessert is disputed. Its current popularity is linked to Le Cirque restaurant in New York City from the early 1980s. The pastry chef at the time, Dieter Schorner, prepared a version working off of recommendations from his boss, Sirio Maccioni, who in turn says he was inspired by the Spanish crema Catalana, which dates to medieval times. That dessert, however, is usually made with milk, thickened with cornstarch and flavored with cinnamon and lemon, so it is not an exact duplicate by any means. That was not the first time a “burnt cream” style dessert appeared in the United States. There are records of Thomas Jefferson serving a similar dessert at The White House 1 and even the 1942 edition of The Boston Cooking School Cookbook by Fannie Merritt Farmer includes a recipe.

There are similar desserts dating back to 15th century England 2 that cooks in the UK often refer to as Trinity Cream or Cambridge Burnt Cream, referencing a relation to Trinity College in Cambridge, but even the school’s own website disavows any association.3

The first written recipe for “crème brûlée” appears to be from Le Cuisinier Royal et Bourgeois, by Francois Massialot. He cooked at Versailles and in the 1691 edition of the book the recipe is remarkable similar to recipes of today. 1

Many recipes will simply state to pour the custard into half-cup ramekins, or containers of similar volume. We think the key is the actual dimensions of the ramekins. Wider, shallower ramekins (as seen in the middle and front of image below) allow for maximum surface area for your caramelized crust, and are what we prefer. 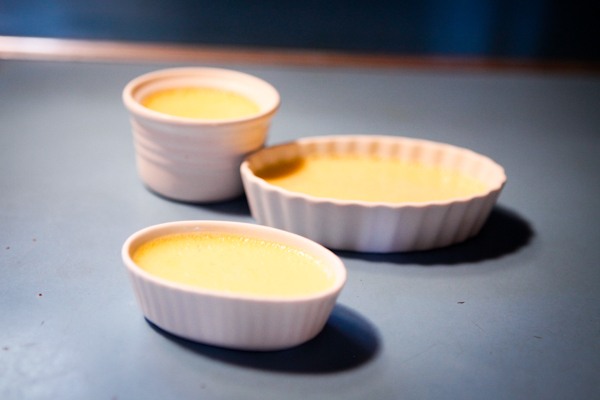