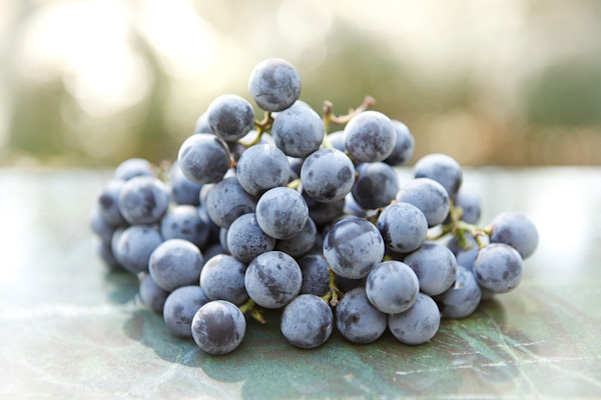 A cultivar of Vitis labrusca. Concord grapes originated in Concord, MA where Ephraim Wales Bull planted 22,000 seedlings, assessing each to choose the perfect grape for his locale – one with a rich, full flavor and that ripened quickly, therefore avoiding the early New England frosts (he cultivated more than just the Concord; he developed a white grape named Esther after his mother, among others).1,2  In fact, the Concord originated from a wild Vitis labrusca vine on his property and he nursed the seedlings for six years before cultivating anything he felt was worthwhile.1

The Concord grape is very dark blue-ish purple, with a strong musky, even wine-like flavor and often sports a lighter-colored bloom on the skin. The seeds are pronounced, as is the aroma. By 1853, Bull had what he felt was a grape good enough to bring to the public (although he had indeed cultivated fruit three years prior) and he debuted his fruit at the 25th Annual Massachusetts Horticultural Society that year to great acclaim.1, 3, 4 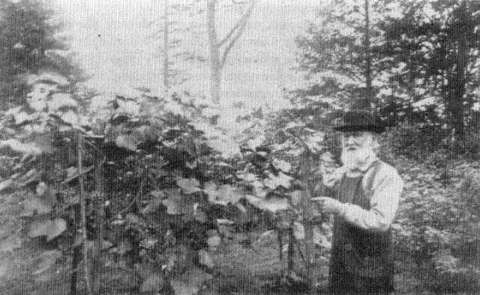 They were offered at market a year later. While Bull did accumulate fame, fortune eluded him. His death was reported in the New York Times and, ironically, the journalist said, “his grave will no doubt be marked by a suitable monument, erected by horticulturists of America”.4 The monument ended up being a plaque on a boulder, and his epitaph, which can be seen in the Sleepy Hollow Cemetery in Concord, reads, “Ephriam [sic] Wales Bull, the Originator of the Concord grape, He Sowed Others Reaped.”2 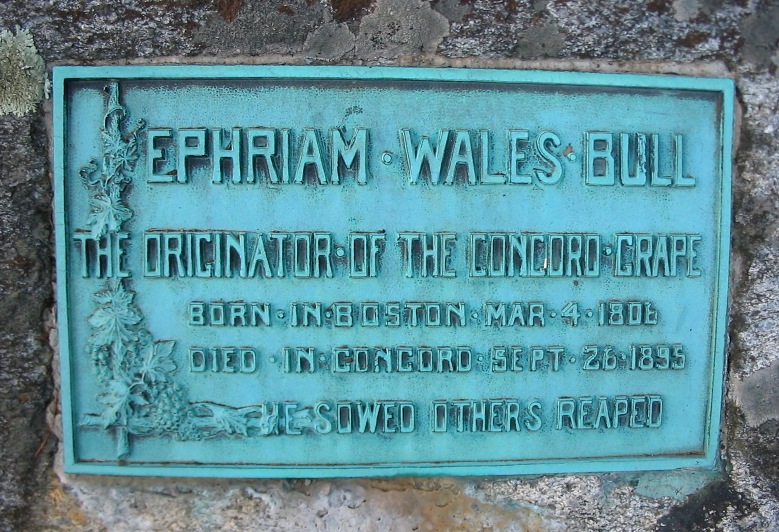 Concord grapes are the familiar base for dark purple grape juice, grape jam and grape jelly, so often paired in the American classic peanut butter and jelly sandwich. They are also used in winemaking. Dr. Thomas Welch created the unfermented dark grape juice in 1869 with his wife and son from grapes gathered from their yard in Vineland, NJ. To quote the Concord Grape Association:

“To preserve the juice, Dr. Welch stoppered the bottles with cork and wax and boiled them in water hoping to kill any yeast in the juice to prevent fermentation. Dr. Welch’s process was a success, and his application of Louis Pasteur’s theory of pasteurization to preserve fresh grape juice pioneered the industry of canned and bottled fruit juices in America. This first juice was used on the Communion table in the local Methodist church for sacramental purposes, and most of the first orders for grape juice came from churches for Communion.”

He also created grape jam in 1918 for WWI rations when it was called Grapelade. His commercial grape jam was launched in 1923.5

Of over 400,000 pounds produced in 2011, most were grown in the Finger Lakes region of New York state as well as the Great Lakes, and parts of Michigan and Washington state.5 In the sweet kitchen, we most often use Concord grapes for pies, jams and jellies.

They are considered a “slip-skin” variety of grapes, which means the skins separate easily from the pulp. We suggest taking one in each hand, pressing near the bottom opposite the stem end and applying firm pressure; the entire grape pulp should pop out. Try our Concord Grape Pie the next time you find them at market. Look for them in supermarkets or farmer’s markets, and there may be some growing wild in some regions as well.